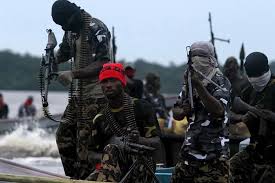 Suspected militants, on Sunday night, killed a Policeman and injured others at Kolo community in Ogbia Local Government Area of Bayelsa State.

According to investigations the suspected militants in a vehicle apparently on a mission to steal arms and rifles from Policemen at check point were stopped just by the Kolo Police station for a stop and search exercise.

They were to have alighted from the vehicle and suddenly attacked the Policemen with machete killing one and injured two.

The Bayelsa State Police command confirmed the story and said the Police Public Relations Officer (PPRO) would soon issue a statement  on the incident.