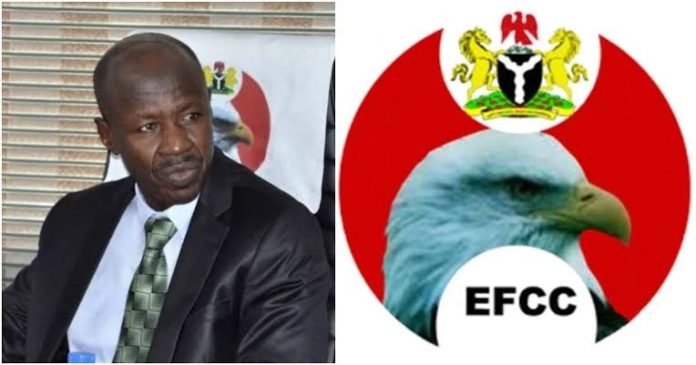 The Justice Ayo Salami-led panel, which is investigating Magu for corruption and insubordination, also listed the individuals and companies that allegedly paid the bribes, in the report seen by THE WHISTLER.

Justice Ayo Salami, Chairman of the presidential panel investigating Ibrahim Magu for corruption and insubordination.
The bribes, according to the panel, were paid by persons being investigated for corruption by the anti-graft agency.

The preliminary report accused Magu of using, “Pastor Emmanuel Omale (who openly referred to the suspended Ag. Chairman as a member of his church and his spiritual son during proceedings before the Commission) and, a Bureau D’ Change (BDC) operator named Ahmed Ibrahim Shanono as conduits for bribery collection.”

“A careful assessment of some of Shanono’s over 150 bank accounts and that of Omale and his Divine Hand of God Prophetic Ministry Church revealed that various sums of money in both local and foreign currencies (dollar) were deposited by persons this Commission uncovered as being investigated by the EFCC,” the report said.

Pastor Emmanuel Omale of the Divine Hand of God Prophetic Ministry Church
The Salami panel also revealed the identities of eight suspects that allegedly paid the bribes to Magu through Pastor Omale and Shanono.

“The transfers were in about 43 tranches between 5th December 2014 and 23rd June 2015. The China Zhonghao Coy is being investigated by the EFCC for abandoning a road contract awarded to the company by the Zamfara State Government between 2012 and 2019,” the panel noted.

An aide to a former Managing Director of the Niger Delta Development Commission (NDDC), Nathaniel Uyo, was alleged to have paid the sum of N10 million into an Ecobank Account (3912014141) of the Divine Hand of God Prophetic Ministry on 09-06-2018.

The report said the former NDDC MD, “was then being investigated by the EFCC over an alleged attempt to bribe members of the Akwa Ibom State APC Appeal Committee in Abuja.”

The report said the BDC was being investigated by the EFCC for, “receiving over one billion six hundred million-naira (N1,600,000,000.00), part of the twenty-seven billion naira (N27,000,000,000.00) Insurance Premiums looted during the administration of President Goodluck Jonathan.”

A former Chairman of the Niger State Pilgrims’ Agency, Liman Kantigi, who was being investigated by the EFCC for allegedly misappropriating funds during his tenure at the agency, also allegedly paid N200 million bribe to Magu through Shanono.

Weeks before paying the alleged bribe, the EFCC was said to have traced N4 billion to two Guaranty Trust Bank accounts linked to Kantigi.

“A.G Ferrero & Co was a contractor to Jigawa State Government during the tenure of Sule Lamido between 2007 and 2013. Lamido was investigated by the EFCC during the period.” the report said.

According to the panel, “Apartment Le Paradisi transferred one million three hundred and twenty thousand naira (N1,320,000.00) into Divine Hand of God Prophetic Ministry Eco Bank Account (3912014143), on 22/04/2014. The company had testified before the EFCC, in respect of a case involving the former Plateau State Governor, Joshua Dariye who was then being investigated for laundering about one billion five hundred million naira (N1,500,000,000.00).”