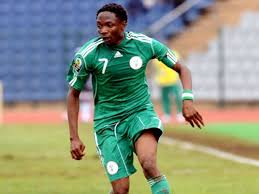 Two goals from Ahmed Musa have earned Nigeria a 2-0 victory over Iceland in their World Cup encounter in Volgograd. Nigeria offered nothing during a lacklustre first half but Musa turned on the style in the second half, first finding the roof of the net with a brilliantly-taken half-volley before a fine individual effort doubled his side’s advantage.

A point against Argentina could now be enough for Gernot Rohr’s team to move to the second round, while Iceland – who missed a penalty through Gylfi Sigurdsson during the latter stages – must beat Croatia to maintain any hope of progression. After Argentina’s defeat to Croatia on Thursday night, both teams were aware that three points would go a long way to securing a place in the last 16 and it was Iceland who looked to force the pace. Gylfi Sigurdsson saw a free kick tipped over the crossbar as early as the second minute before the Everton playmaker squandered a good opportunity on the edge of the box with his weak curler being easily dealt with by Francis Uzoho.

However, Iceland failed to build on their start and with Nigeria content to keep hold of the ball without showing much intent to force the issue in the final third, the remainder of the first half featured very little goalmouth action. A temperature of 32C played its part but just as it appeared that the first half would peter to a close, Iceland found a second wind with Alfred Finnbogason failed to apply a decisive touch when meeting Sigurdsson’s set piece from the right. During two minutes of added-on time, Jon Dadi Bodvarsson also wasted an opportunity with the Reading forward heading wide of the far post after getting on the end of a corner delivered to the back post.