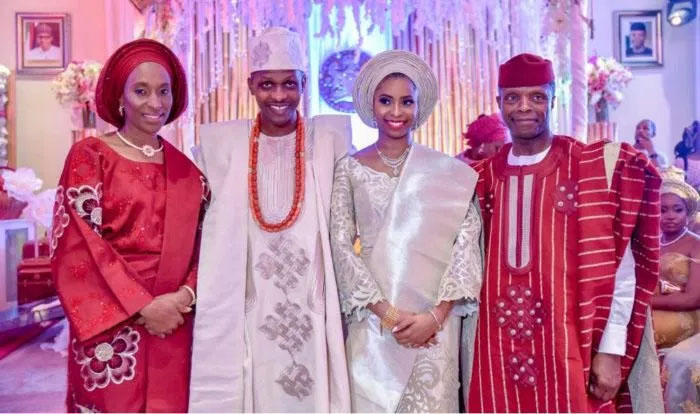 Accredited State House journalists were bared from getting close to the venue of the reception at the Conference Centre (old Banquet Hall).

Newsmen were told that the Osinbajos and the groom’s family opted for a low-key event, hence, barring of the Villa media.

The ceremony started with the traditional wedding at his Akinola Aguda official residence in the presidential villa.

The vice president, had also, via his Twitter handle, confirmed the engagement of Damilola and Oluseun, and thanked God for the union.

Journalists, who thought their accreditation tag will grant them access to the venue, were told they were not wanted at the ceremony, yesterday.

Security aides of the vice president, on Wednesday, informed newsmen that they were not needed at any of the programmes for the ceremony.

Osinbajo’s security aides said the vice president and his family had already contracted publicity of the traditional wedding and the white wedding, which will take place tomorrow, to a private firm, said to be owned by a popular R and B singer.

State House staff and others, who had business in the villa, were prevented from parking their cars at the Banquet Hall Car Park nor at the second one otherwise called, Forest Car Park. The reception was attended by few state governors, families and dignitaries from the public and private sector.

The white wedding has been scheduled for the National Christian Centre, Abuja, tomorrow and another reception for guests will be held at the State House Conference Centre.

It was also gathered that the security personnel assigned to guard venues of the ceremonies were warned not to take photographs with their phones or other electronic devices.

As villa staff struggled to find alternative parking spaces, there was traffic gridlock for hours within the main entrance of the villa, which lasted for hours.