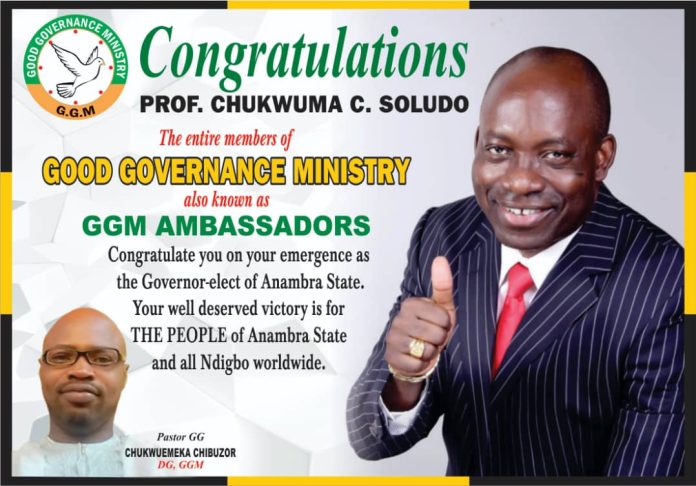 It has been ennobling reading a deluge of congratulatory messages from Cee Cee Soludo’s fellow contestants in the Anambra November 6, 2021 governorship election. Top members of the opposition and the local folks are not left out too. We believe more will toe this dignifying line with time as time is the healer of all wounds. For sure, there will always be another day. Soludo himself has been through that discomforting path before in 2010 wherein he put a call through to Mr. Peter Obi and congratulated him. Thereafter, he reassured his supporters that there would be another day, picked up the pieces, bore no grudge and continued offering his party, state and country his time, talent and treasures.

Furthermore, he didn’t relent in giving back to society in education, health and human empowerment. He waited for God’s appointed time and when it came, he gave it everything he had and here we are. How?

Over two years ago, Ndi Anambra in large numbers began the clamour for Soludo to contest this election which he has just won. They figured he was the right person to succeed the willingly working Willie Obiano in the post-oil and covid 19 era. They said they wanted someone who had done big things before. His track records matched perfectly to this requirement. The clamour gave birth to more than 35 support groups that remain self funding. Their cells sprouted across the globe and the clamour became more stringent.

Now, even before INEC published the timetable for the just concluded election and the parties had rolled out their timetables and guidelines for primaries, Soludo’s name was in all the wards in the state. When he accepted to run, he embarked on a statewide tour to consult members of his party, the All Progressives Grand Alliance (APGA). He worked hard and won overwhelmingly in the primaries. APGA Candidate, Soludo campaigned in all the twenty one local government areas and met with special stakeholders and interest groups within and outside the state. On election day, the hard work manifested where many forsook financial inducements to vote for APGA and him. He led in majority of the polling units and in the end, pulled off one of the most brilliant, free, transparent and fair electoral victories ever recorded in the political history of Nigeria. Any body who witnessed the polls will attest that the INEC process allowed for little or no manipulation.

That is why there have been spontaneous and tumultuous celebrations across the world since his victory. Even the opposition and the defectors are not left out.

So be of good cheer.