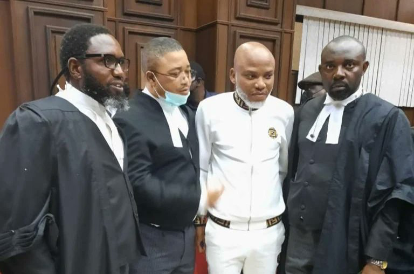 The trail of Nnamdi Kanu, the leader of the Indigenous People of Biafra, IPOB, has been adjourned to January 19, 2022.

Justice Binta Nyako of the Federal High Court sitting in Abuja, made the ruling on Wednesday, when the trial continued.

The IPOB leader was brought into the court premises by operatives of the Department of State Services (DSS) around 9.50am.

Kanu is standing trial before Justice Binta Nyako of the Federal High Court in Abuja based on charges related to treasonable felony and acts of terrorism brought against him by the federal government of Nigeria.

There was a mild drama in court as the IPOB leader’s lawyers allegedly staged a walkout before the presiding judge.