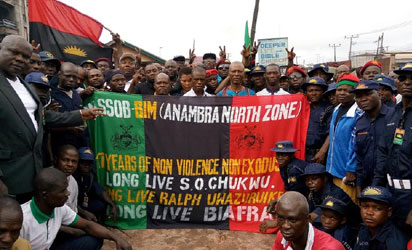 Following this, MASSOB has given the police 48 hours to release the arrested members, threatening  to paralyse business activity in Anambra State if this is not done.

News gathered the invading policemen first arrived the MASSOB office in the morning, arrested the five MASSOB members and also took away documents and other property.

The police team returned two hours  later, but was confronted by MASSOB members, leading to the invitation of soldiers, who arrived in three Hilux vans.

Reacting, the Anambra North Zonal Leader of MASSOB, Emmanuel Omenka, said: “They should not take our posture for weakness. After 48 hours, if our security man is not released, we will ground business activities in Onitsha and environs.”

According to him, “we do not know where they have taken our five members. The police took two of our motorcycles and ransacked the office and even invited the soldiers to help them deal with us.”

In her reaction, the Ogbaru Regional Director, Mrs. Virginia Ubazuonu, condemned the action of the police and military, adding: “Enough is enough; we can no longer take this.”

When contacted for comments, the police spokesperson in the state, Nkeiruka Nwode, said she would get back to our reporter, but never did as at the time of filing this report.

Nnamdi Kanu is an Empty Head, Biafra Belong to the Ijaws- Asari Dokubo