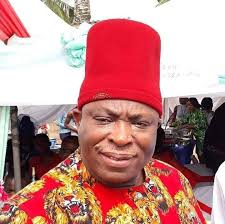 …On 31st May 2019,Apga conducted a national convention at Awka after  Chief Victor Oye wrote to INEC and gave the commission date ,time ,venue as stipulated in section 85 as regards APGA Nat convention which INEC came and monitored and Victor Oye and Labaran Maku were reelected as APGA national chairman and Secretary respectively.
“On 20th April 2020,Ichie  Benjamin Onugbolu went to court challenging the leadership of Oye and the convention that produced him and on 18th Nov 2020 ,it was affirmed at a court that Chief Oye was the Nat.chairman of Apga and the court validated the convention that produced Oye and Maku.Nobody challenged  It in appeal court as  INEC continued dealing with Oye.

How can INEC within six months jettisoned a judgement not appealed ?

…There is no questioning of who the chairman of Apga is .The person that INEC put his name as APGA candidate ,Hon Umeoji knows who the chairman of Apga is because he bought form from Oye at APGA Nat. Secretariat Abuja whom he recognized as his nat.chairman but when he was screened out ,he went to one Jude Okekes who is not in line of succession for primaries .He is in House of Reps and obtained his form in 2019 from the same Oye led Apga leadership.

…Apga conducted primaries at Awka on June 23rd monitored by INEC and Gov Obiano ,the leader of the party was there.Bot members were there too and we all voted .Soludo won and his name was submitted to Inec which was accepted because Oye followed all the process for primaries and was given INEC access code to upload the particulars of Soludo and his deputy Dr Onyeka Ibezim.
…On July 2 ,INEC uploaded Soludos name and duly acknowledged him as the candidate of Apga for Nov 6 Anambra guber election .INEC ought to have published the name of Soludo on 9th July as stipulated in section 33 sub section 1 which states that the commission shall publish the name of a candidate given to them after 7 days but they didn’t only to accept a kangaroo judgement from Birnin kubi ,Jigawa state on July 16th and without studying the full judgement published the name of Umeoji
…The judgement from Jigawa wasn’t even a declaratory judgement and there was no place in the judgement that the judge asked INEC to stop dealing with Oye as the national chairman of APGA. Neither Oye nor APGA was joined in the suit and Inec has never faulted the leadership of Oye since 2019.
…INEC monitors the activities of political parties and keeps records of their Nat.officers .Jude Okeke is not in the list of the nat.officers of Apga that INEC has been dealing with for the past two years neither is the plaintiff in the Jigawa suit Rabiu Garba in the list .
…INEC did not give Jude Okeke  access code to Inecs portal to upload  the particulars of any candidate but Oye ,so what is Inec that said they were neutral trying to achieve ?

…Soludo will contest Nov 6 Anambra guber election with Apga ticket and I’m sure of that .

Appeal court ,Kano division will sit tomorrow and I have no doubt that the court will throw away Jigawa judgement and ask Inec to publish the name of Prof Charles Soludo