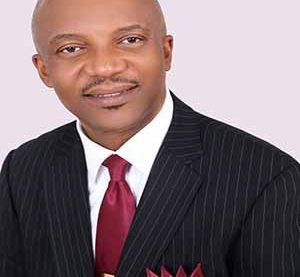 Anambra State Deputy governor, Dr. Nkem Okeke has called on politicians and their supporters in his (Okeke) community not to disrupt the ongoing development process in the area, saying that the election should not be used as a tool of division in the community.

He said this on Tuesday in a meeting with Ofu Obi Youth Forum in Enugwu-Ukwu community, his hometown.

According to him, any vote from Enugwu-Ukwu  to another political party was like disrupting the ongoing development process in the town, saying that elections would always come and go with its stories of winners and good losers but in brotherhood they shall remain for life.

“Election had never brought disunity in this community and it will not happen in my time, we are brothers, let’s watch each other’s back” he said

He said if his kinsmen from Enugwu-Ukwu community support him by voting his party, APGA in their re-election bid, posterity would hold him accountable if he fails to keep his own pact with the people.

Okeke said that the level of infrastructural development in the community was amazing when compared to what was on ground since the creation of the state. He said the community has no better time than now to appreciate his efforts in attracting the much he had done in a little space of time in office.

The deputy governor said the present government has added much value to all facets of human endeavour, including security, youth empowerment, and mechanized agriculture, among others.

A stakeholder in the community, Chief Arthur Nwandu who corroborated Okeke’s claims, concerning the dividends of democracy in the community urged voters in Enugwu-Ukwu home and abroad, to come and support the movement of development ongoing in the town.

Nwandu said that Obiano’s administration has a human face and as such need to be supported for him to complete his developmental programmes for the state.