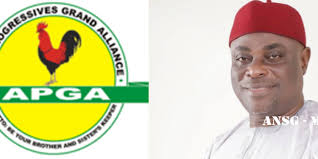 The National Chairman of All Progressives Grand Alliance, APGA, Chief Victor Oye has called on the Inspector General of Police, IGP; Mr. Alkali Baba to arrest those people who went on air Tuesday in Abuja to convene illegal National Executive Committee, NEC, meeting of the party in fragrant violation of law.

Chief Oye, who was enraged by what he described their action as antic of political thugs, also charged the Director General Of Department of State service, DSS, Mr. Yusuf Magaji Bichi and other sister security agencies to rise up to the occasion by bringing to justice those behind that calamitous statement that caused the country embarrassment.

The APGA chairman noted that this was a threat to Nigeria’s democracy where irresponsible people can wake up from their slumber, gather people, go on national television and pay to embarrass people.

He also, suggested that, “The way such illegality could be addressed is very simple; it can be addressed through the amendment of the electoral act where you have to put in measures, an inbuilt mechanism to stop such situations from taking place.”

According to him, “Now what happened yesterday (Tuesday) if not properly handled can give room to more serious national embarrassment.

“People would be bolder to go on national television once you can pay the fee, go on air and announce whatever you like then the social media would air it, you know things nowadays spread in seconds.

“What I believe could be done is to make the situation, the conditions much more strict, it shouldn’t be once you can pay the bill you would be aired; no! You have to scrutinize it.

“I know every TV station has a legal desk and when such an issue comes up you take it to the legal desk and take legal advice then they reach out to us in APGA ‘is there any conflict in your party?’ or you go to INEC to ascertain who is the rightful chairman of the party.

“It is not in contention; I and my executives were elected on the 31st of May, 2019 through a nationally recognized convention witnessed by INEC and since 2019 we have been doing our businesses without any hindrance but every four years people come up to cause confusion in the party.

“It is not peculiar to APGA alone, it is in every political party but it seems like APGA own is becoming very notorious now and this is one thing we have to stop and again the security agencies have a role to play in this situation.

“If anybody does anything that is illegal, against the law such a person should be dealt with to serve as a deterrent to other people which is the proper thing to do.

“I call on the Inspector General of Police, the Director General of DSS to arrest all the people involved in the charade of yesterday. That is the only way we can have further confidence in them.

“They must arrest those people and persecute them but what they did was a national embarrassment not only to APGA but to all Nigerians of good will.

“It has to be seriously addressed and I am also calling on Mr. President, this is a threat to Nigeria’s democracy where irresponsible people can wake up from their slumber, gather people, go on national television and pay to embarrass people.

“It has to be handled by Mr. President that is the call by APGA. All the security agencies must look into this matter and deal ruthlessly with those people that caused the nation this international embarrassment because it is all over the world now. People have been calling me from America, from Britain, all over the world ‘what is happening in Nigeria?”

Speaking on the fortune of the APGA, especially the November 6 governorship election in Anambra State, Chief Oye, said that the former APGA administration under Mr. Peter Obi has laid foundation for a new Anambra State.

According to him, “You see I like this question, it is all about the people and their welfare. Once you protect the interest of the people they will stick with you at all times. Since 2006 APGA came into power in Anambra and it has continued to deliver on its election promises year in, year out.

“Peter Obi came and performed superlatively, Obiano has come now and he is doing better all to the glory of God and the betterment of the people of Anambra state.

“Remember when PDP was in power in Anambra state, it set the state on fire, set the government house on fire, broadcasting service on fire, destroyed government property everywhere.

“There is no political party in Nigeria that has enjoyed the popularity that APGA has enjoyed in Anambra state, in short all over Nigeria.