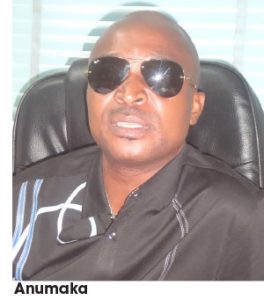 Chief Tobby Anumaka, Patron Okpoko Igbo and chieftain of the All Progressives Congress (APC) has described the victory of the All Progressives Grand Alliance (APGA) candidate and Governor of Anambra State, Willie Obiano in the just concluded Anambra State governorship election as victory for the late Dim Chukwuemeka Odimegwu Ojukwu (Ikemba Nnewi).
Has President Muhammadu Buhari’s visit to the South-East change the perception of an average Igbo about his person?
President Muhammadu Buhari’s visit to the South-East is a strong indication that he does not hate Igbo contrary to earlier insinuation that the President is anti-Igbo. I stand to be corrected; the cook, driver and most domestic staff of President Buhari are Igbo. Most roads, buildings and facilities in some secondary and tertiary institutions in the South-East were constructed by the Petroleum Trust Fund (PTF) under Buhari. One of the roads he did in the region is the Onitsha Head Bridge/ Upper Iweka road, when Dr. Nnamdi Azikiwe died in 1996 to enable those coming for the burial of Zik have easy access to his house . The sin of Buhari against Ndigbo was because he defeated former President Goodluck Jonathan who Igbo lined behind during the 2015 presidential election. Most of us saw it a defeat of Ndigbo. I always admonished our people that election is a contest and one person must win and after election both winners and the losers have to come together and move the nation or state forward. This Igbo must realise and come to terms with. Buhari is not President of the north but President of Nigeria. That you hate him cannot change anything, therefore we must embrace him as part us and then get our share of the national cake. The South-East should be grateful to God for the historical visit of President Buhari to the region. It is historical because that was the first visit by Buhari to the Southern part of Nigeria since he assumed office as the President of Nigeria in 2015. I think by the visit and promises made Buhari have expressed his love for Ndigbo.
What would you say are the benefits of President Muhammadu Buhari’s visit to the South-East?
The president was emphatic about his resolve to shift attention of his government to infrastructural development in South-East. He made it clear that the just approved loan by the National Assembly will be channeled towards infrastructural development of the region. As I speak to you arrangement has been concluded for the commencement of work on the Second Niger Bridge. I’m sure Buhari will do what past governments were unable to do for Ndigbo in terms of road construction. I pray my brothers and sisters in South-East will do the needful to maintain this cordial relationship between the region and Mr. President. This can be possible if Igbo embrace APC and vote massively for the party in 2019.
How do you feel after the President’s visit to Anambra State and the people still did not vote for APC candidate, Dr. Tony Nwoye? Isn’t that a sign that Igbo have not accepted APC in the South-East?
That shows the kind of man Buhari is. Many wished that he influences the election result in Anambra but he never did just as he did not manipulate the results in Rivers, Edo and Ondo States. Buhari obeyed the wish of Anambra people. The visit of Governor Willie Obiano to President Buhari weeks before the election was a welcome development. Buhari does not play politics of do-or-die hence he is not desperate about  winning at all cost as was the case with some past leaders. With the outcome of the Anambra governorship election, it is obvious that the electoral process under Buhari has improved. The President sees the entire country as his constituency. So, let’s wait till 2019 when Buhari will seek re-election whether Igbo will vote for him or not. It is too early to conclude that Ndigbo won’t vote for Buhari in subsequence elections.
You mean you are not bothered over the defeat your party suffered in Anambra?
Chukwuemeka Junior’s decision to join APC is for the best interest of Igbo. That does not mean that Ojukwu junior is not popular, but to keep Ikemba’s spirit and what he stood and died for alive, Anambrians decided to vote for APGA. Therefore, Anambra people did not vote for Obiano but Ojukwu. APGA is Ikemba’s legacy which I think Igbo vowed to sustain. I assure you that Igbo will see the importance of Emeka’s decision in 2019 because it will be the time Igbo will decide if they want to produce president of Igbo extraction or not.
What it means is that if Buhari is re-elected in 2019, the coast will be clear for Igbo to lay claim to the presidency because other geo political zones must have taken their turn. However, the South-East has no choice but to align with other geo political zones to re-elect President Buhari so that our chances will be brighter in 2023.
The result of Anambra governorship election showed that Igbo have accepted APC and have endorsed President Buhari for a second term by the result margin. APC polled closed to 25 per cent of the votes cast. If you juxtapose this with the perception of APC and Buhari by Igbo before the election, APC has been accepted by Igbo.