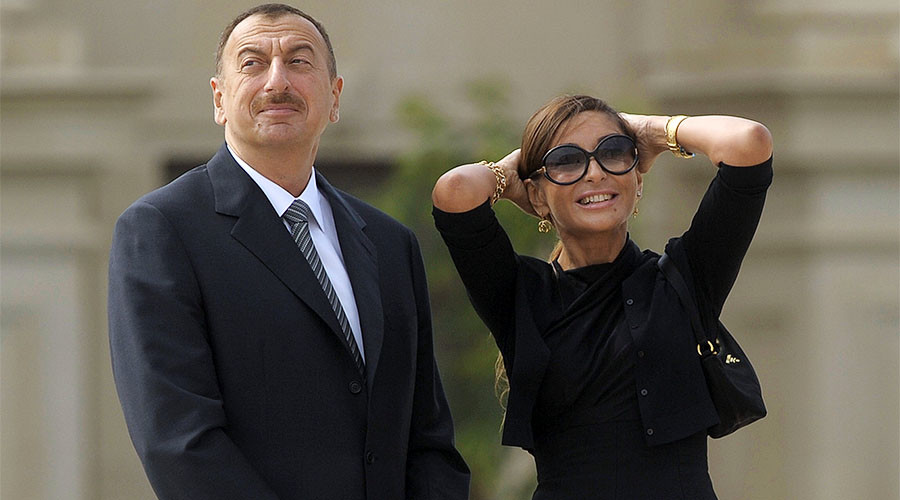 Aliyeva, 52, has been an MP for the ruling Yeni Azerbaijan party since 2005 and head of the influential Heydar Aliyev Foundation – named after her father-in-law and former president.

Born into the powerful Pashayev family, Aliyeva has sometimes been seen as a possible successor to her husband, who took over in 2003 after the death of his father Heydar, a former KGB officer and Communist-era boss.
Mehriban Aliyeva (née Pashayeva) was born into a family described in Wikileaks cables as “the single most powerful family in Azerbaijan.” Her grandfather was noted Azerbaijani writer Mir Jalal Pashayev. Her uncle Hafiz Pashayev was Azerbaijan’s first Ambassador to the United States. Aliyeva’s father Arif Pashayev is Rector of the National Aviation Academy in Baku, and her mother, Aida Imanguliyeva (1939–1992) was a prominent philologist and arabist.

Mehriban Aliyeva finished secondary school in 1981 and married Ilham Aliyev, the son of Heydar Aliyev, in Baku on 22 December 1983.She continued her studies, in which she excelled, at the Azerbaijan Medical University and later at the Sechenov Moscow Medical Academy, from which she graduated in 1988. From 1988–92, Mehriban Aliyeva worked at the State Research Institute of Eye Diseases of the Russian Academy of Medical Sciences in Moscow, which was led by Dr. Mikhail Krasnov. Two articles in The Times in 2005 described her as a “qualified physician”and “former eye doctor.”

The Aliyevs have two daughters, Leyla (born 3 July 1985) and Arzu (born 23 January 1987) and a son Heydar (born 2 August 1997). Leyla is the editor of Baku magazine, published by Azerbaijani Russian businessman Aras Agalarov, and is married to his son Emin Agalarov.

Gulak’s Son Speaks On Alleged N10bn Deal His Father Had With Gov Uzodimma??