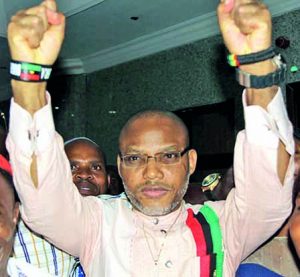 The Department of State Services has given accreditation to only 10 media organisations to cover the trial of leader of the Indigenous People of Biafra Nnamdi Kanu.

Mr Kanu’s trial resumes on Monday at the Federal High Court in Abuja for alleged treasonable felony among other charges following his arrest and extradition from a yet-to-be-disclosed country.

Some of the high-profile national dailies barred are PUNCH, The Guardian, Vanguard, Daily Trust, Tribune, Daily Sun, The Cable and Daily Times.

The DSS did not give reasons for its action which legal practitioners have described as illegal as it is a public trial.

Meanwhile, Kanu’s lawyers have urged IPOB members and supporters to be well-behaved in court during Kanu’s trial.