Home Nigeria News Buhari wants to keep us together by force, it won’t work –Adebanjo 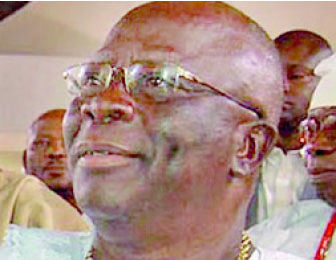 He will be 90-years-old in April, but Elder statesman, Ayo Adebanjo SAN still exudes more passion than many youths about Nigeria. He said that by opposing restructuring, President Buhari wants to hold the country together by force rather than by peace offered by advocates of restructuring. He insists that Nigeria is already a united country but that the constituent units must negotiate the terms of their unity and not live under the terms dictated by a military imposed constitution.

The Afenifere chieftain also declared that Buhari is aiding and abetting anarchy by not taking stiff measures against the menace of Fulani herdsmen. He also spoke on other issues.

What is your impression of former President Olusegun Obasanjo’s letter to President Muhammadu Buhari?

I endorse it emphatically. It is only a prejudiced man and a sycophant that will not admit the points made there. There is no allegation the ex-president made in that letter that can be faulted. My only disagreement is where he was talking about a new party, ‘I don’t want anything but Buhari and I’m also concerned about anything after Buhari.’ That is why any organisation in which Obasanjo has interest I will query the K-leg.

But as far as his allegations against Buhari are concerned, they cannot be faulted. And on the admonition that he should retire and not contest in 2019 I agree with him. I rarely agree with ex-president Obasanjo on any issue but on this one I consider the message and not the messenger.

But does Obasanjo have the moral…

I have my own view on Obasanjo which are not positive. But right now we are talking about the letter he wrote that president Buhari has not coped well with the affairs of the country and he gave instances, that you (Buhari) are clannish, that you are dictatorial, all the security apparatus of the country controlled by one section of the country, is that false? You say you have zero tolerance for corruption yet you turn blind eyes to the corrupt people around you? Those are the issues to be discussed; those are the grounds on which Obasanjo said Buhari has performed below expectation.

When you talk about the economy, Obasanjo gave instances, it is deteriorating, and those are the issues the people should be discussing. Those complaining are ignorant. How many of them commenting can be said to be clean on the issue of the country? None of them, they are all contributors to Buhari or Obasanjo, but that is not the issue now. We should discuss the issue of moving forward. My disagreements with Obasanjo is in the public sphere, my disagreement with Obasanjo is not personal, it is purely on governance, but when he says the right thing, I will not disagree with it, that is not statesman like. What men of goodwill who love this country should discuss are the issues raised by Obasanjo. You may disagree with the solutions but the issues raised are correct. To me the only thing remaining in that letter is for Obasanjo to apologise to Nigerians because he is one of those who sponsored Buhari. In better democratic societies President Buhari would have resigned. On this security issues alone, he should have resigned because he is incapable of solving it or deliberately supporting the criminality.

He knows very well that the armed herdsmen are committing these crime, has he arrested them or has he disarmed them? He should have instructed the Inspector General of Police to go after armed herdsmen, do you rare cattle with AK47? Is the Inspector General of Police not aware that people shouldn’t carry guns without license? Those carrying AK47 are they not known or you’re saying they are licensed? These are the reasons we say Buhari and his APC are condoning these killings. Let the public discuss the issues Obasanjo raised; Buhari has failed us politically, economically and otherwise. We are saying that Buhari has failed and the Information minister is telling us about their achievements, is that what we are discussing? Shouldn’t he fault Obasanjo’s statement?

You said you do not agree with Obasanjo’s idea of a new party. Why?

Any party in which Obasanjo is connected is a suspect because there is nothing Obasanjo will do without his own personal interest involved. I’m distinguishing the issues he raised and where I disagree. It is just like when people say Atiku is supporting restructuring because he wants to be president. That is not my concern, I am an advocate of restructuring, Babangida and Abdulsalami are also there, Gowon was until he defected. Restructuring is the root cause to peace in this country. Without restructuring we can’t have peace in this country. I give you an instance, state police is part of restructuring, do you want to tell me that if Benue was the one that manned their police or regional police the herdsmen will waylay them the way they did? But unfortunately, the governor is a lame-duck governor. If you are a governor under this military imposed constitution you are a lame-duck governor because you have the power to make the law but you haven’t got the means to implement the law that is why there is need for restructuring.

The APC committee on restructuring just submitted its report and endorsed restructuring while making other far reaching recommendations. What is your take?

Any sensible person in this country will know there is no credibility to that committee. Did they not put restructuring in their manifesto? Is it after we criticised them that they are setting up a committee? If they are honest about restructuring why didn’t they implement it? They are just buying time.

Still on restructuring, the likes of Gen. Babangida, Gen. Abdulsalami and even former vice president Atiku were once in positions where they could have done something to restructure the country but they did nothing to that affect. Why do you think they are advocating for it now?

I’ve said I’m not looking at the past because it doesn’t solve our problem, those agitating for restructuring welcome a rethinking. For me if the APC is serious about restructuring, they should do it before the election so that restructuring will not be a campaign issue because we all agreed on it, then the election will be based on manifesto and what we do under this imposed constitution. When you restructure the problems of corruption, security and others are all solved. The issue of if you support us we will support you will not arise. No region will be offered the presidency out of sufferance. It should be your constitutional right, not with the support of any region that is what is happening now. We should not rely on the support of any section to enjoy our rights.

Look, there is an issue people are overlooking. This restructuring we are talking about is not new; it is the constitution that granted us independence. That was the constitution agreed to by all the political leaders, Dr. Azikiwe, Chief Awolowo, the Sarduana of Sokoto until 1966 when the military staged a coup and imposed this new constitution on us. The setting then was called derivation. It is just insincerity and hidden agenda that make people ask what is restructuring. They imposed this military constitution so that they can dominate other sections of the country. I liken it to the horse and the rider; in this case they are the rider and the rest of the country the horse.

How do we move forward since the 1999 military imposed constitution is not working?

Buhari wants to keep the country together by force. But if he is sincere about keeping us together in peace, the 2014 national conference recommendations are clear and enough to achieve that, but they are trying to dismiss it. They say they didn’t do it and that the delegates were not elected.

If there is anything there that you don’t agree with bring it up let us remove such a thing; if there is anything that is not there let us put it and agree on it. You cannot set up any assembly that will be of better quality than what we had at the 2014 conference. The conference cut across every section of the country. I believe that those calling for restructuring are those that want this country to remain together, anybody saying anything contrary is an opposition to the unity of Nigeria. We are already united, what we are saying is that the unity must be on agreed terms as we had under the 1954 constitutional conference that produced the independence constitution.

Let’s talk about security; can the Benue people for example explore self defence against the herdsmen?

The Fulani herdsmen go to other territories to attack and kill them and you have not declared them a terrorist organisation and you say you’re a fair commander-in-chief? I say you’re aiding and abetting anarchy. Those who are killing people in their own territory you did not attack them, you did not arrest them, you know them and you did not even disarm them.  Buhari is looking for anarchy, when people come from another territory to attack and destroy you, if the people now organise against them are you going to blame the people? If you push somebody to the wall is he not going to resist? You see this Fulani organisation, their secretary said they were going to resist the anti-open grazing bill and that they will attack the people of Benue and you have not gone after him? Yet the IPOB that was in their own territory, they have not killed anybody and you declared them a terrorist organisation. When you now talk they tell you that they are people from other countries. So people from other countries now come to Nigeria, not at the border but inside the country to kill people and we say we have a government.

As we approach 2019, the Nigerian Intervention Movement is seeking a third force as a way forward. What do you think?

I agree that we need a third force but how it will come about is another question. I agree with Obasanjo that neither APC nor PDP is in a position to solve our problem. But how that third force is composed is another matter. We need to make that third force credible because the major parties have tinted records. When you talk about APC, are you talking about PDP I or PDP II?

Since 1979 when Obasanjo handed power to civilians to date he has played a role in the emergence of every Nigerian president, yet according to him they are all failures. Is it that he is a poor judge of character?

Obasanjo may help get you a job but he won’t help you keep it. All Obasanjo is saying is, I helped put you there and you have disappointed me and the reasons for his disappointment are clearly stated.

The order of 2019 elections are causing ripples as the House of Representatives want to re-jig it and place presidential election last because of the fear of bandwagon affect. What is your take?

If you were asked to write a blueprint on the way forward for Nigeria, what would be the key points?

Restructuring and reliving the independence constitution. We have a working document in the 2014 conference report. If Buhari is serious he should constitute his own body to study the document work out the details and implement it. The APC wants to confuse restructuring, they say it is breaking the country, that they don’t accept restructuring but they accept devolution of power, now they accept state police. Is that not restructuring?