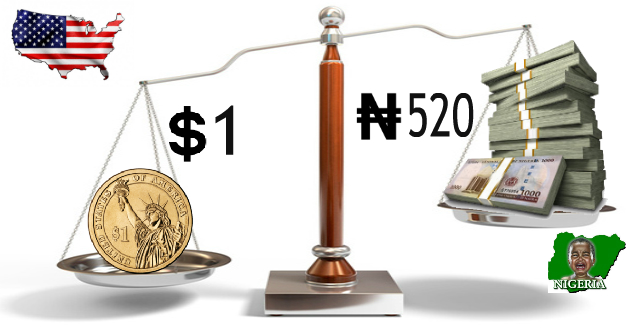 The Central Bank of Nigeria, CBN, has rolled out a new foreign exchange window to stem the tide of demand pressures which had battered the Naira in the unofficial foreign exchange market. But the new measures, which increased supply of foreign exchange resources to the market, came on stream, yesterday, just as the fortunes of Naira nose-dived further in the parallel market, closing N520/ USD1.

This was also coming against the backdrop of a surge being recorded in foreign reserves. Nigeria’s foreign reserves climbed more than one year high to cross over $29 billion with strong indication of hitting $30 billion before end of first quarter 2017, barring any negative development in the external sector. But currency dealers have continued to witness excess demand which broke the N500/$1 mark two weeks ago and has since pressured upwards, with dealers yesterday speculating that the trend would continue through this week.

Transactions at the CBN’s new forex window meant to meet the needs of Nigerians for personal and business travel, medical needs, and school fees, are to be settled at a rate not exceeding 20 percent above the interbank market rate. In a statement, titled ‘New Policy Actions in the Foreign Exchange Market, signed by its Acting Director of Corporate Communications, Mr Isaac Okoroafor, the apex bank said all banks would receive amounts commensurate with their demand per week, which would be sold to customers who meet usual basic documentary requirements. The apex bank stated: “The CBN would meet the needs of parents, guardians and sponsors who are seeking to make payments of school and educational fees for their children and wards. Such payments must be made by commercial banks directly to the institution specified by the customer. “This would also apply to customers seeking to make payments, or purchase foreign exchange, for medical bills and paid directly to hospitals. The supply of FX to retail end-users (PTA, BTA, school fees, medical bills, etc) would be sustained by the CBN.”
Source: Vanguard Newspaper.