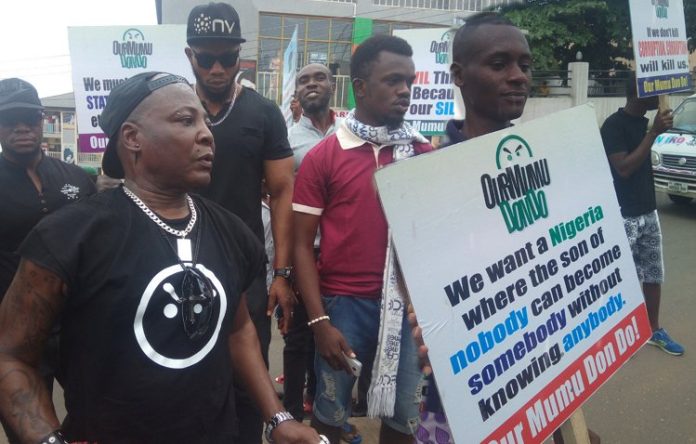 The Coordinator Of OurMumuDondo Movement ,Anambra Chapter-Comrade Ndubuisi Anaenugwu has confirmed to the newsmen that the President Of All The Frustrated Nigerians and The Convener of OurMumuDondo Movement -Charles Oputa(Charley Boy) has remained consistent in the struggle to promote social justice,accountability,transparency ,good governance and engendering a new social order in Nigeria.Ndubuisi stated that CharleyBoy has traded off, donated and staked his comfort zone to mingle with the ordinary people on the street in order to sustain good governance crusade against the powerful political class in Nigeria.

It is rather rare to see CharleyBoy specie -like in a rotten system like Nigeria.On the allegation made by Deji Adeyanju that he has lost confidence in CharleyBoy Leadership of OurMumuDondo,Ndubuisi has this to say,’ CharleyBoy is an institution.To be an individual institution is not a day’s work.CharlyBoy brand will take generations to either destroy or build and the man behind that brand is Charles Oputa-Area Father.I am aware that many local and international institutions have shown interest to partner with OurMumuDondo to build a new order in Nigeria.The Anambra Chapter of OurMumuDondo Movement is proud of Charles Oputa personality and will continue to support his programs with the latest launching of Nigerian Social Contract -NaWeBeGvernment.Ndubuisi Concluded.

BVI Channel 1 Online can confirm that many local and international organizations are still strongly behind CharleyBoy Leadership of OurMumuDondo Movement to ensure that political power is returned to the People-the true owners of political power.