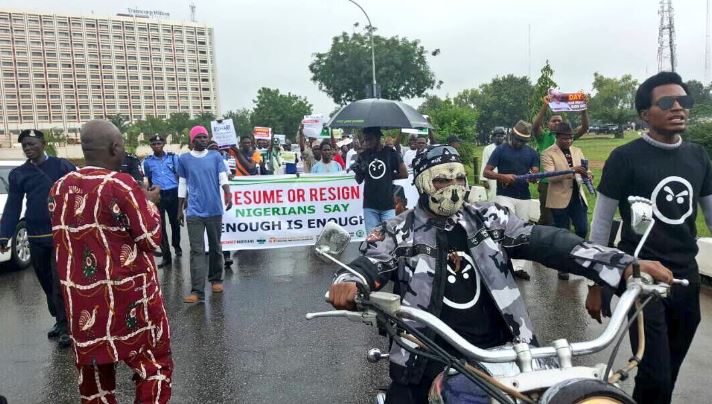 An alleged group of Traders on Tuesday attacked a group of Protesters led by Charles Oputa, popularly known as Charly Boy, at the popular Wuse Market in Abuja.

Charley Boy has been leading a protest demanding the resignation or return of President Muhammadu Buhari who is receiving medical treatment in UK.

Some of the traders who spoke to the News Agency of Nigeria (NAN) said that the action of the protesters was politically motivated and not a representation of minds of Nigerians.

A jewelry trader, Malam Adamu Musa, said that the protesters had the right to protest, but pointed out that they ought to know that the president was not on ‘honeymoon’ in the UK.

“These protesters should know that it is not everything that one should politicise, especially the issue of health,” Musa said.

Mr Filibus Abuh, a petty trader, said that they never expected the protest to be taken to the market where common Nigerians were looking for their daily bread.

Abuh said that the protest disrupted business activities in the market for some hours.

The Spokesman of the Police Command in the FCT, DSP Anjuguri Manzah, told NAN that the prompt intervention of the police averted a major clash between two opposing sides at the market.

“The police had brought the situation under control at the market,”Manzah said.

He said that to forestall further breakdown of law and order, the management of the market had ordered its closure.

Manzah also said that a large contingent of policemen had been deployed to the market to provide security.