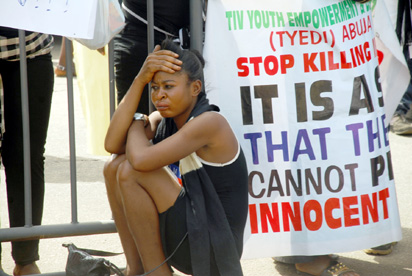 MAKURDI – A Catechist of the Catholic Church, Christopher Unenger and two others, Aondowase Uma and Ahanbee Uma have been reportedly murdered in two separate attacks by suspected herdsmen at Tse-Oragbo Nyiev council ward and Yelwata all in Guma local government area of Benue State.

Vanguard gathered that the Catechist who was in charge of administration at the Roman Catholic Church in the area, was in company of his in-law Ayem Mbakuughur when their attackers waylaid and killed him.

According to the source, “the both of them were going for early morning Mass when they both ran into the ambushed but his in-law managed to escape alive.” When contacted, Media Director, Catholic Diocese of Makurdi Reverend Father Moses Iorpuu who confirmed the development gave no further details. In the same vein, the two brothers, Aondowase Uma and Ahanbee Uma who were murdered in Yelwata by herdsmen in an ambush were said to be returning from Yelewata Market on a motor bike around 8:pm when they ran into the ambush. According to our source “the armed herdsmen killed the two bothers and also burnt the motorbike their victims were riding on before the attack.” One of the survivors of the attack, Orihyev Nyaga who was reportedly shot on his left hand told our source that he was returning from the market on a motorbike when he ran into a road block mounted by the herdsmen. He said “they attempted to machete me but I managed to escaped but they shot me on my left hand while I tried to escape. I abandoned my bike and ran into the bush to hide but shortly after I went back to the market where i raised alarm.” It was further gathered that the bodies of the two brothers were later recovered by youths of the area and handed over to the Police at Yelwata who deposited same at the mortuary in the area. The latest killing came 24 hours after the condolence visit of President President Muhammadu Buhari to the state. It could also be recalled that 24 hours to that visit last Monday, two Mobile Police sergeants were also murdered in Tse-Orogbo, Guma local government area by suspected herdsmen.