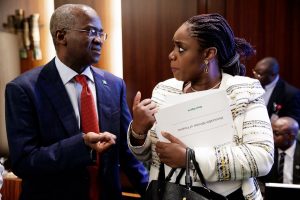 The Minister of Finance, Kemi Adeosun, has disclosed that President Muhammadu Buhari has agreed to take necessary steps to address the issues that deadlocked last Federation Accounts and Allocation Committee (FAAC) meeting in Abuja.

She disclosed this after a meeting with Governors Abdulaziz Yari of Zamfara State, Abubakar Badaru of Jigawa State and Abubakar Atiku Bagudu of Kebbi State and the Chief of Staff to the

Adeosun had last week stated that if the issues that led to the deadlock were not resolved, salaries of civil servants might be affected in the states.

The committee members of FAAC had expressed reservations over some of the costs presented by the Nigerian National Petroleum Corporation (NNPC), saying they could not be justified hence the decision not to approve the accounts.

The revenue sharing meeting had ended in a deadlock on Wednesday last week for the third time since March 2018.

Speaking on the outcome of the meeting, Minister of Finance said, “well, as you know, last FAAC meeting ended in deadlock and since then we have been having series of engagements between ourselves, the governors, the commissioners and, of course, various stakeholders. Today’s meeting was for me to brief the governors and the Chief of Staff and by extension, Mr. President, on the progress we have made so far on our position. Mr. President has promised to take the next step and to that extent, we are very satisfied.”

Asked why the issue with NNPC has remained problematic and if the company is not in the Treasury Single Account (TSA), Adeosun said, “they are. Every agency of government is in TSA. You know FAAC is unique. FAAC is a meeting where all the revenue generating agencies make returns on net of their expenses. It is in the area of deductions where we have disputes. The disputes are not on the gross revenue but on what has been deducted from that gross revenue giving us the net, which is being brought into FAAC. But I think this is a healthy process. We must be satisfied with figures before we sign for them. We must, as stakeholders, make sure all our agencies are aligned with all the programmes of government in terms of getting this economy really moving.

“We are still very much dependent on oil, on NNPC for our revenue, so we do need to have sometimes some of these. I see them more as reconciliations than standoffs. I’m very sure we will have FAAC in the next day or so.”

Yari, for his part, expressed happiness that President Buhari has decided to step in to resolve the issues.

According to him, “there is headway because Mr. President and the Minister of Finance will meet with NNPC officials so that we can resolve the problem with the FAC committee.”