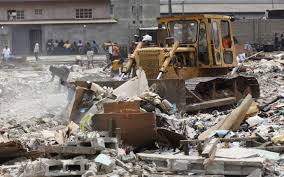 Gov Obiano may have taken a tough decision to replicate Mallam Nasir El- Rufai Abuja feat in Anambra State.The decision to cleanse Anambra State of shanties and illegal structures is expected to come with a stubborn resistance from the affected populace. Gov Obiano is prepared for this onerous task before him. Firstly, he will not be presenting himself for re-election and secondly, he does not belong to any known cabal in the state. He once told his mammoth supporters that his second tenure in the office would not be business as usual and that he would go for the jugular .Many did not take his warnings serious and as usual went about their business the same old way until the demolition bulldozers kissed the road at wee hours of the night!

This reporter can confirm that there were mixed reactions that greeted the demolition exercise. While many cried that the demolition of illegal structures was targeted at the very poor masses on the street who overwhelmingly voted for APGA Government and that the State Government did not make an alternate arrangement for the stranded masses whose shops were affected. There were others who believed that Gov Obiano has been appointed by God to rescue the State from the evil hands of ‘Areaboys’.

However,the illegal structures which are found at many corners in the State are usually built on gutters ,thereby blocking the drainage systems with most of them known to be criminal hideouts and places where prostitutes and other miscreants engage in nefarious activities.

Special Adviser to the Governor on Security- Chikodi Anara has this to say ‘the demolition exercise will be conducted throughout the State. Every structure on the waterways, shops on drainage systems, shanties and any form of illegal structure in Anambra State will be demolished without fear or favour.

The real test before Gov Obiano

What happens to the civil and public servants that approved those illegal structures? Many of these illegal structures got approval from the ministries and government agencies. Would these people be allowed to work the street free while the ordinary people cry wolf? This Reporter thinks that the demolition team should visit Abakiliki Road , Awka.It is illegal for road to be constructed under a high voltage power line . 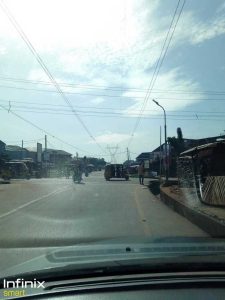 Our working Governor should visit that high voltage power line along Abakiliki road,Awka to see the impending danger facing road users on daily basis . It has been reported how high voltage power lines collapsed in Portharcourt, Uyo etc and electrocuted many Road Users.The question everybody is asking including insiders in Governor Obiano Administration: Is Government road supposed to be built under a high voltage power line? Who authorized the construction?  What of houses?

Governor Obiano should also review the activities of Anambra Housing Development Corporation. This Reporter is in receipt of letters written to his Excellency on how former Management of Anambra Housing Corporation connived with land speculators to sell land(s) on the waterways. Part of the letter reads ‘ Removal of water installations on Road 10, Ngozika Housing Estate and Encroachment on the Water Channels in and Around the Estate.We wish to alert Your Excellency on the incessant encroachment on the water channels in the Estate.

Most of the water Channels at different points are being blocked by those who engage in illegal annexure of the plots near the water channels.This is capable of increasing the rate of flooding in the already flooded Estate’ The Letter concluded. As at the time of this report, no tangible action has been taken. In the same Estate , there are other instances where the former management connived with land speculators to legalize an illegality. Several petitions have been sent to the new management of the housing Corporation headed by Prof Asika. One of such petitions was on a plot illegally created by the former Management led by Chief Patrick Obianwu, specifically on road 14 plot 22A almost on the stream with total disregard to the estate original master plan.

The major challenge before Governor Obiano very good intention to keep Anambra State clean of shanties and illegal structure is the courage to confront the powerful cabal, official corruption in approving illegal structures and monitoring the implementation of his directives. Many on the street are crying and lamenting that the Governor’s men on the demolition job are selective and partial in carrying out the ‘annointed ‘ job.

We will keep you updated while the demolition exercise in Anambra continues. You can send your case to bvichannel1@gmail.com for publication.