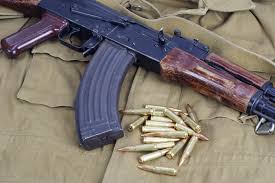 The saying that what a man can do a woman can do better certainly rings true for Talatu Imram, an indigene of Shinkafi, in Shinkafi Local Government Area of Zamfara State. She had been trafficking weapons for bandits for seven years and got paid after every successful trip.

A divorcee with seven children to show for her failed marriages, Talatu, who lives amongst the bandits in Zamfara State, was having a field day until she was arrested by men special task squad, Abuja after one of her major sponsor was picked up.

Looking very sharp and full of life, Talatu changes husbands like clothes as she moved from one bandit to the other. Until 2019, she was married to a bandit who was killed by the security forces.

In this interview, Talatu, who spoke in Hausa language, talked about how her sojourn in the dangerous job.   She said: “I am 40-years-old and a divorcee. I was arrested through one of the men popularly known as Orujeje that usually gives me weapons to ferry for him to other states in the north.

I was arrested at Nassarawa State where I ran to by the police, who I heard were looking for me after the they arrested Erujeje. I have been in the business of transporting arms because I live amongst the bandits; that is what I do to survive and take care of my seven children. I have been married several times and was married to bandits. One of them was shot and killed by the security forces last year but I later married another and divorced him, so I am single now.

I have been married severally and divorced severally because I hate to suffer and the moment my husband begins to make me suffer, I will divorce him and move on with life.

“I am among the women that usually transport arms for kidnap groups in Zamfara and I get paid at the end of every trip. I have been in the illegal arms trade for over seven years now.

I have made plenty of money but I cannot now say this is the total amount of money that I have made because they usually pay me the money it bits. Sometimes they pay me N20,000 after every trip and I use the money to take care of my seven children. I have seven children from my previous husbands.

“How I transport the weapons to wherever they want me to deliver them is very simple without being detected by the security men on the road. Before I embark on any of such trip, my boss, Orujeje, usually sends money to me to go to the markets and buy box. After buying the box, I will then go to the market again and buy babies clothes and those items that they usually ask pregnant women due for delivery in the hospital to bring. When I return from the market, I will first dismantle the AK47 riffles and lay them neatly inside and use the belt to tie it so it doesn’t shake during the journey because of bad road. After that, I will then fill the box with the baby items neatly inside the box, close and ready to go.

Because of the security situation in our state, there are many military and police check points and they usually ask everyone in the vehicle to come down for search each time we get to where they are stationed. I have always dodged this process because each time they ask me what I have inside my box, I will tell them it’s women stuff and quickly open the box for them and when they see pad, pants and children’s clothes they will ask me to close the box and that is how I have evaded being caught by the security agencies these seven years that I have been in the business of transporting illegal weapons for bandits and other criminals.