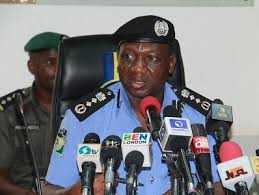 • No court can stop us –Committee chair

Inspector General of Police (IGP), Mr. Ibrahim Idris, yesterday, told a Senate ad-hoc committee investigating allegations leveled against him that he would not respond to questions.

The IGP, who appeared in company with his lawyer, Alex Izinyon, at about 2.30pm, told the committee, headed by Senator Francis Alimikhena, that since the case was already in court it would be sub judice for him to respond to questions from lawmakers.

He also claimed that the existence of the committee was against the Standing Rules of the Senate.

This is coming at a time supporters of IGP Idris stormed the National Assembly in solidarity.

Convener of the protest, Gloria Ugbeji, said the solidarity march was important based on the various reforms the police chief had brought to the service.

When asked question by one of the senators, the IGP said: “I will not make any oral comment or answer any question in respect of the allegations in view of the various civil and criminal cases pending in the law courts, more especially when the senator has already been arraigned in court in respect of this matter.

“I decided to appear before this Senate committee on the allegations out of high respect I have for the Senate and my respect for the rule of law.

“Furthermore, it is expected that the Senate and the committee will refrain from making references to the issues, as it will be against Order 41 (7) and 53 (5) of the Senate Standing Orders 2 (15) as amended.”

Order 1(a) of the Senate Standing Rules states: “The proceedings in the Senate and in all committees of the Senate shall be conducted in accordance with the following Standing Orders:

Order 41(7) of the Standing Rules states: “The Senate shall not receive any petition on any matter for which there is a judicial remedy.”

Also, Order 53(5) states: “Reference shall not be made to any matter on which a judicial decision is pending in such a way as might, in the opinion of the president of the Senate, prejudice the interest of parties thereto.”

IGP Idris’ lawyer had a heated argument with senators, when he stopped the police boss from responding to questions raised by the committee chairman, Alimikhena.

He said: “I represent the IGP. I want to state that we have very high respect for the Senate. In pursuant of the invitation, we decided to be here to demonstrate that we have nothing to hide. I have gotten instructions from the IGP. We have responded to all the allegations raised, word-to-word, to the committee.

“This is an ad-hoc committee. There are rules. I am urging you to use your rules. In October 2015, a similar case arose between an ad-hoc committee and Rotimi Amaechi. Ethics committee was asked to investigate him. Because the case was before a court in Rivers State, the Senate suspended it.

“The Standing Rules of the Senate says that when a case is in court, any reference to it may be prejudice. Nigerians are interested in this. We are saying this in the interest of justice. We are not hiding anything at all. I am only drawing your attention to precedents set by the Senate.”

Izinyon’s response did not go down well with Senator Alimikhena, who responded angrily. He told Idris and his lawyer that the committee was set up before they went to court.

“You cannot tell us the FCT High Court has given an order. You cannot come here and tell us what you know. This is a committee set up by the Senate. It was set up before you went to court. The court is interfering with our work. Let us stick with the truth. The Senate is not out to witch-hunt anybody. If you are going to court, it does not stop the Senate from probing the virement made by the police boss. You cannot stop that,” he said.

Izinyon retorted: “The law is clear. If there is any virement, the Senate will not look at it. It is a criminal offence and it is not the Senate that should handle that.”

Senator Hope Uzodinma, who is also a member of the committee pleaded with Alimikhena to adjourn the hearing to allow the committee study the content of the written response of the IGP.

“I want to caution you. We are all statesmen in the country. We are all one. If we must succeed as a country, we must create a synergy where both arms must work together. The SAN, you must agree with me that this is not a law court. You will do us a favour to resolve differences between these parties.

“The Standing Rules says ‘if its the opinion of the Senate president.’ Are you the Senate president? This matter needs to be resolved in a manner that Nigerians will be happy. If we issue a warrant, the IGP will bring himself. I do not even know why the IGP cannot speak for himself.

“We want to see the allegations before us and see how we can resolve them, in the interest of the country. If the IGP is not in a position to speak, in my view, he can submit his defence. We can look into it and decide how to move forward. This is a parliament.”

Senator Obinna Ogba also appealed that the hearing be suspended.

“Having heard what the IGP said, I have seen some documents we need to study. I want to appeal to the chairman to give us time to study the documents and invite the IGP later,” he said.

Lidani said: “I think it makes sense for us to study the documents. From the chairman’s reaction, it appears the preliminary objections will not be entertained. We have just been served this documents. We will study it. We will determine if you have been able to address the issues raised.

“Senator Misau raised the issue because he said his privileges were abused. It was not a public petition. We need time to look at the documents you submitted. If the issues are not adequately addressed, we will call you again. If there is no need, we will not call you. We are not witch-hunting anybody.”

Hukunyi remarked: “I think some key points have been highlighted, which I completely align with. One of them is the possibility of adjourning this meeting. He has read his own side, rightly or wrongly. The lawyer to the IGP may have to review some of the things he said. He said virement is a criminal offence. He is wrong. The executive is aware of this fact. It has been raised that part of the responsibility of this committee goes beyond the issues that are now in court. With due respect, as high as your office is, the nature of the issues raised is not good for the IGP or the Senate. These issues need to be cleared. This is the reason this committee was put in place.’

Senator Nyako added: “I think all of us should understand that the attitude here is not us versus them. We are not here to witch-hunt the executive. There are issues that have been raised. We need to address these allegations. At the end of the day, the police may even benefit more from this. We will study your documents and address the issues.”

Meanwhile, the Senior Special Assistant to the President on National Assembly Matters (Senate), Ita Enang, told the committee that the presidency would explore a multi-door option in resolving the issue.

“We are glad for the warm reception. We are not here out of honour. We are here out of constitutional provisions. We respect the job and powers of the legislature. We thank you for inviting us. We also appreciate what you have said, that you want to have an adjournment. I am hoping that this adjournment will pursue other multi-door options to resolve this issues,” he said.

Alimikhena adjourned the committee’s sitting indefinitely. He, however, said the Senate has the power to entertain virement, saying the issue had nothing to do with the court.

“Coming here is your duty. When you are summoned by the parliament, you must come. It is a not a favour,” he said.

. I want to tell you that the issue of virement is the function of the parliament. It is not something that should be handled by the court.

This committee came up before you went to court. The court is interfering with our committee. If we need you again, you will respond,” he concluded.

In a related development, hundreds of protesters yesterday took over the entrance of the National Assembly to show solidarity with the IGP Idris.

The convener of the protest, Gloria Ugbeji, said such solidarity march was important based on the various reforms the police chief had brought to the service.

She said it was important for IGP Idris to be “left alone to focus on what he is doing.