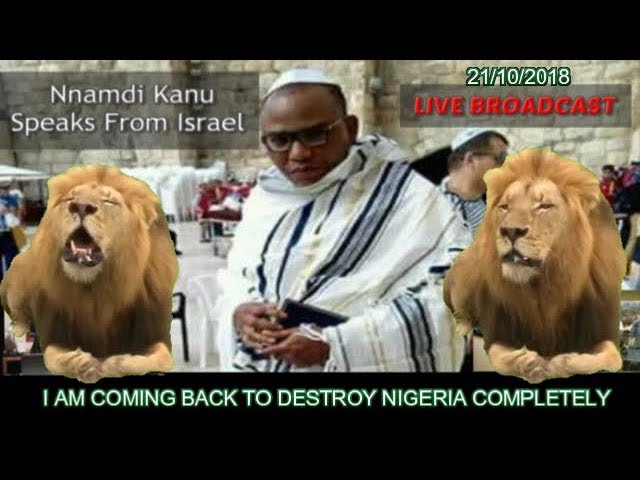 Mazi Nnamdi Kanu ,the leader of IPOB has vowed to return to Nigeria but rejected facing trial in what he described as “a Kangaroo court.”

Kanu, in a broadcast on Radio Biafra, yesterday evening, reiterated he would come back to “Biafraland” but was silent on when he would return.

The IPOB leader, who had been missing since last year, was sighted in Israel, on Friday, praying in a Synagogue.

Video clips of that outing went viral and when its authenticity was doubted, Kanu indicated he would make a live broadcast, which he did, yesterday evening.

He said: “They wanted to intimidate us. They wanted to murder us into submission but, they failed comprehensively because we are IPOB and I am Nnamdi Kanu. No mortal flesh can kill me. They have not given birth to that very person but I shall return. I assure you.

“I said it in 2015 that I would go back to that very country and I returned. I assure you that I am coming; you’ll know that definitely. Since they didn’t want me to come to court, I will come back to Biafraland.

“They have failed and they will continue to fail. They can murder us as much as they like but, any day we decide to retaliate, the world shall bear us witness. Their intention was to kill me to ensure that I didn’t go to court; (because) they knew that if I go to court, that very country will never be the same again. To cover their shame, they hastily arranged to kill me. They asked me to call off the Anambra election boycott. I told South East governors that they should go and get me something from Abuja; they should get me a date for a referendum.

“There was no date for a referendum; there was nothing tangible at all about devolution. You want me to call off boycott and I said no!

“I make bold to say that my forced unavailability deserves an evidentiary hearing in a competent court of law; not in a Kangaroo court where all the details will be ventilated, to determine the legal impact of that very attack on my ability to make myself available to the court as required. That such a hearing was never allowed to hold in (Justice) Binta Nyako’s court was not only disappointing and that’s the cause of the current impasse. As someone out on bail, why would the Nigerian government want to kill me and pretend or lied that I jumped bail when I am a ward of court and, therefore, deserved the protection of the court?

“I decree that that there is no longer South East or South South Nigeria. It shall be known as Biafra. Without referendum, nothing will happen. IPOB will not participate in any election and that position will never change…”

“If he said something complementary about me in his broadcast as you have informed me, that is good. I don’t have much to say other than we thank God that he is alive. We are happy. The military didn’t mean well for him…” he said.

On his part, Bishop Abraham Chris Udeh, in Nnewi, Anambra State, said: “We have been on 40 days fasting and prayer for God to grant us the kingdom East, which is Biafra. It was on the 20th day of the programme that Nnamdi Kanu resurfaced. I’m not a member of any pro-Biafra group but I strongly believe in Biafra.

“Well, the resurfacing of Kanu, Biafra is very close. Giving the Igbo the position of VP is not what we want. It is Biafra and that is where we stand.”