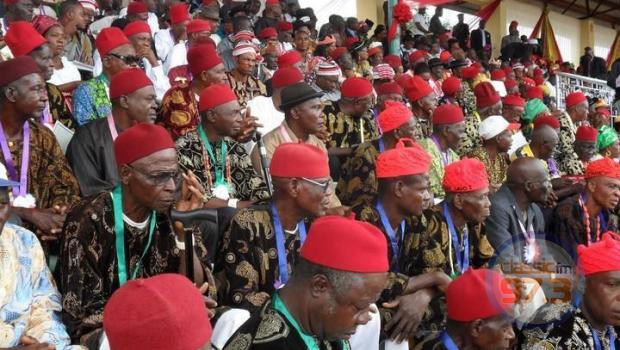 President General of Ohanaeze Ndigbo, Chief Nnia Nwodo, in this interview speaks on various issues affecting the nation; 2019 general elections, restructuring, killings by herdsmen, federal government’s proposed ranching project, alleged padding of 2018 budget and IPOB among others. While expressing fears about next year’s general elections, Nwodo alleged that the ranching project is an explosive ethnic bomb that would finish the country. He vowed that nobody can impose ranching on Igboland.

How do you feel about the state of security in the country?

The security apparatus of the country has failed; its management has also failed. The head of state extended the tenure of service chiefs; and the assumption was that they had done so well; they should continue to be there until their plans firm up and they can choose competent successors. First of all, I am opposed to the extension, and as a lawyer; I see it as illegal and I hope that can be tested in our courts. The civil service is under a law; the law establishing the civil service in Nigeria has tenure for the civil servant; after which he goes on retirement. I don’t know anywhere in the law that provides room for the elongation of a tenure. There is amendment in some states and federal establishments, making allowances for contract employment especially in the universities where professors may retire but they have no replacements in their areas of specialisation and they retain them on contract bases. But on those contract bases, they get less paid than when they were running their tenure and their contract is renewable after a short period; say about two years. I don’t know where a civil servant who has reached retirement can be told to stay in office contrary to the provisions of the law. So, what the head of state has done is illegal; and I am surprised that nobody either in the National Assembly or any of the civil so- ciety organisations has questioned it. Secondly, he has breached the provisions of the National Constitution on the Federal Character in giving the impression that loyalty to the head of state is a function of where he comes from and therefore must determine who is a commander in any of the armed services. It’s a misnomer and runs counter to the necessity of building a united country, which the president must be an embodiment. This country has never been as divided as it is today. The president’s appointments remind people of where they are from; it has negated every advantage that we have acquired over the years in terms of building a united country. Why is it that everywhere; Fulani herders have killed, murdered people in their numbers, the police arrived after; the whole essence of security is prevention, not management of crime after it has happened. An effective security must prevent a crime from occurring; in order words, it must have information, surveillance, it must have capacity to predict what the criminal is likely to do. We look at all these, social media are awash with pictures of Fulani herdsmen with riffles; their faces are there and nobody has arrested any one of them; those who are arrested, no one is prosecuted. You get the impression that it’s a religious war. What on earth justifies herdsmen entering a catholic church while the service is going on and murdering two priests; parishioners and members of the choir? And turning round to wear the uniforms of members of the choir; making songs and caricature of them with all their faces showing, trending on the social media with the entire Nigerian security system seeing them and somebody tells you that this is Libyan inspired.

When did Mammar Ghadaffi die? Any country with an effective security system would say; Ghadaffi is dying with unprotected armoury, people are going to take the arms and percolate around Africa. How have we made our borders secure to ensure that these people do not come in; our borders are the most porous? Evidences are arising from Kano indigenes now that a number of people who are not Nigerians are coming into Nigeria to register for the next election. Where are their addresses? INEC has done an administrative inquiry; fine, but in law you can’t be a judge in your own case. INEC could not have made a mistake, and be the one to investigate its own mistake. It must allow a judicial inquiry and even if its report has not been made public and the social media are replete with permanent voters’ cards showing names and pictures of children; the evidence is already in public domain, and it has not reached government to set up a judicial panel of inquiry; how do you ensure that the coming election is transparent when all the processes leading to it are not transparent. The weight of the arguments and the fact that these matters are in public domain is enough for government to say justice must not only be done but seen to be done; let there be a judicial panel of inquiry on every infraction that has been complained about in the registration of voters. So, that we remove the iota of doubt in the mind of every Nigerian as to the election we are going into. Right now, Goggle has developed a technology by which you can count people without necessarily asking them to go to the PVC centre; to do an aerial counting meaning that the population of Nigeria can be done through aerial counting. Our National Population Commission has never been allowed to tell us the population of each ethnic origin; why? We’ve never been told how many Christians and Muslims exist in Nigeria because it’s not one of the things to be enumerated in a population headcount; why? But we knew that when the British were doing our headcount and the population headcount you have now, the figures are inconsistent with the figures of the British Government even on a projected bases using growth trends in world demographic statistics.

So, everyone laughs at us. Even children enrolments in schools do not reflect the demographic pattern given to certain areas of the country. Our population headcount is fake; it’s unverifiable and so will our voters’ registration be unless there is judicial inquiry into these processes that sanitise the system.

Do you think any other president of northern origin can restructure the country?

Restructuring has ceased to be the views of one section of the country. There are northerners in the middle belt who believe in restructuring; there are northerners not from the middle belt like Atiku Abubakar; President Ibrahim Babangida who believe in restructuring. Restructuring is not a sectional ideology; it’s the only way to give birth to a productive, united and more prosperous Nigeria; without it, Nigeria is stillborn. Do you realise now that what we pay as interest of nearly $20billion that we have as external loans is more than what we generate as taxation as a nation. We pay 40 per cent of our GDP in retirement of external loans and it is at a growing trend. Right now, America has upped its interest rate; there is a forum of mass withdrawal of investments in our business cycle in search of greater interest rate in America. What it’s going to do is that if nothing happens to shore up; thank God there is artificial rise in price of crude oil but that is likely to fall because America is fighting and OPEC has just agreed to lower their prices. So, this increase thing is a short term thing. When there is a foreign flight of capital, what will happen is that the price of the Naira will weaken in competition for the dollar because the amount of dollar flowing into our country is severely limited. So, it will be based on the dollar that we earn from our exports. One expects that the political rhetoric as we go into election should be telling us; how do we get out of it and that’s why we are saying that restructuring is the only way out of it. Restructuring takes our energies back to the productive units in smaller concentrations and independence to make decisions which are all in the province of the federal government. We have an amorphous federal government that does not work