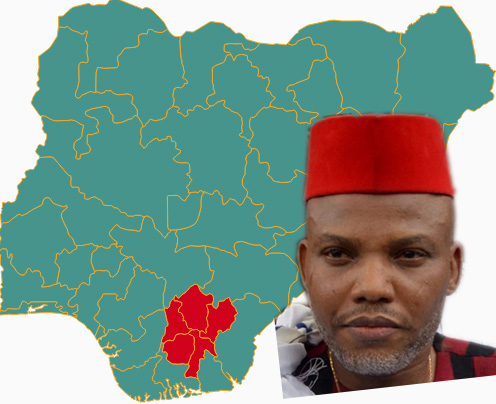 IPOB in a statement by its Media and Publicity Secretary, Comrade Emma Powerful, alleged that “Abia State Government in collaboration with other South-East State governments and Ohanaeze Ndigbo designed, perfected and unleashed Operation Python Dance on the people and the accompanying killing spree ostensibly to eliminate our leader, Mazi Nnamdi Kanu, since he cannot be bought or compromised. Leader of Indigenous People of Biafra, IPOB, Mazi Nnamdi Kanu “We, the IPOB, under the command and leadership of Mazi Nnamdi Kanu are holding the Government of Abia State, four other South-East state governments and Ohanaeze Ndigbo responsible for the siege and invasion of our leader’s compound in Afaraukwu Ibeku, Umuahia from September  10  to 14, 2017. “The repeated denials of Governopr Okezie Ikpeazu and his hired hands will not eradicate the fact that, he, along with other South East governors designed and perfected Operation Python Dance and the accompanying killing spree ostensibly to eliminate our leader. “The Abia State government led by Dr Okezie Ikpeazu should, therefore, stop deceiving Nigerians on his real motive for imposing the curfew that followed the attack on Mazi Kanu’s home. He should rather toe the part of sanity by accepting responsibility of his well thought out action with his co- conspirators and give a true account of their action, before the people of Biafra. “He should also explain how they managed to allow envy and jealousy over the popularity of Mazi Nnamdi Kanu to overwhelm them to the point of conniving with the Nigerian Army in killing defenseless unarmed Biafra agitators fighting for the liberation of their people. “The Abia State governor’s claim that he imposed a curfew during the invasion of our leader’s house in Umuahia to save 11 million Igbo in the North is laughable.

That was a fabricated lie to deceive the people and with the intention to deflecting rising anger against him by Biafrans in Nigeria and in the Diaspora.” “The only reason Dr Okezie Ikpeazu imposed a curfew in Abia State was to stop IPOB members from mobilising to defend our leader,  Kanu, during the invasion of his home by the soldiers. that he personally invited into Abia State. If it was the interest of securing the lives of Igbo in Hausa territories as they claim, they would not have escalated tension in the country by actively asking the Nigerian Army to come and kill the arrow-head of IPOB.” “What South East Governors and the Ohaneze Ndigbo leadership did not factor into their calculation was that IPOB is a global movement with a unique structure that no man can destroy, the architects of that attack were dreamers for thinking their well crafted lies which they have been selling to media houses can save them from the impending doom.

JUST IN: Kanu pleads not guilty to FG’s amended charges