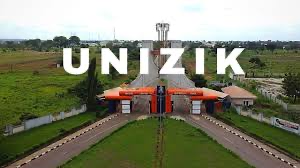 Parents of the late David Ogbonna, who allegedly committed suicide in one of the hostels at Nnamdi Azikiwe University Awka have denied school fees hike as the cause of their son’s death.

The parents , Pastor and Mrs Esther Ogbonna were livid with media reports attributing school fees hike by the University as the cause of their son’s death, as according to them, all his needs were provided for without worry by them and his siblings who as well contributed in turns for his upkeep.

The mother of the deceased, Esther Ogbonna who spoke on behalf of the family as the father watches during a meeting with management of Nnamdi Azikiwe University Awka insisted that the media reports were misleading and diversionary, even as she commended the management of Nnamdi Azikiwe University Awka for the steps taken so far to unravel the mystery behind the death of their son.

She reiterated the need for all the security agencies involved to trace and unravel the mystery behind her son’s death allegedly via suicide on his room,as the school fees hike dummy wasn’t an issue at all.

She said her late son couldn’t have died of financial incapabilities as aside their support to him and that of his siblings,he was hardworking and did so many minor jobs like tailoring and laundry to support himself.

She informed the school management that his son complained of his poor grade in one of his courses in first year during her last discussion with her son a day before his demise which she encouraged him to work hard on the course to remedy the deficiency in next exams. She added that his son’s tone wasn’t lamentations to warrant taking his life the next moment.

One of the brothers of the deceased student, Samuel Ogbonna who accompanied his parents to Unizik after the death of David collaborated his mother, Mrs Esther Ogbonna’s story about his late brother and was at lost on why he should take his life because of financial crisis allegedly hike in school fees as the media reported when all his needs were provided.

Meanwhile, the Nnamdi Azikiwe University Awka in a press statement dated 22nd August,2021 said the University community was saddened by the ugly incident and would leave no stone unturned to unravel the mystery behind the alleged suicide of the student in his hostel room.

In press statement referenced NAU/DIPR/71, signed by Chika Gladys Ene,
Ag. Head, Information and Public Relations/Chief Protocol Officer of the university , the university asked for calm by all staff and students as it’s doing everything possible in the right direction concerning the incident.

The incident occurred on 20th August, 2021 at the male Hostel inside the University premises. Media reports attributed his death allegedly to hike in school fees. But, rather than rush to the media, we embarked on thorough investigation into the remote and immediate cause of the unfortunate demise of a future star by inviting everyone that needed to speak over the incident supposedly.

“The parents also met with the University Management to discover their side of the story to be able to unravel the mystery behind his death.

“The parents of the late student, Pastor and Mrs. Ogbonna during the meeting with University Management, Council and the SUG categorically stated that hike in school fees wouldn’t have been the reason for their son’s death as they provided everything he needed.

‘The parents also insisted they supply him with food items regularly even upto last Thursday before his unfortunate demise. The parents said also that other siblings of their late son contributed money at intervals to assist their late brother. This was affirmed by one of the deceased brothers Samuel Ogbonna who accompanied them. The mother, Mrs. Esther Ogbonna revealed that their late son was hardworking as he did minor jobs like tailoring and laundry services to augment the provisions from home. She said that her son also complained about his poor performance, as she recalled in one of her conversations with the late son where he expressed displeasure over one of his results and she advised him to buckle up in subsequent examinations to remedy the deficiency.

While the University Management is relentless and keen in her investigation of this ugly incident, it is however disheartening that some media houses have already embarked on a mission to tarnish the Universitys image disregarding the place of thorough investigation in journalism.

The statement concluded: “The University Management is deeply pained by this bad news in this citadel of learning and further calls on staff and students to remain calm as investigation is ongoing. Staff and students are encouraged to visit the Centre for Counselling and Career Development which was created on the heels of the assumption of the Vice-Chancellor and mandated to entertain issues especially one that disturbs mental health”.