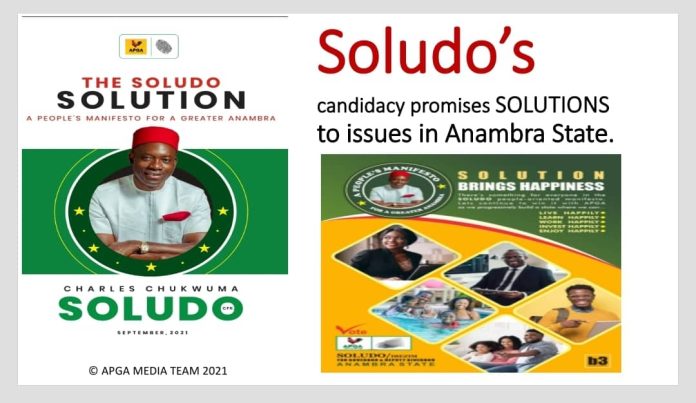 Prof Chukwuma Charles Soludo Media Office has vehemently debunked the news making the rounds that Soludo Campaign train was attacked on Tuesday at Ihiala, during the All Progressives Grand Alliance (APGA) campaign rally_

A release from Soludo Media Office signed by Mr Joe Anatune, said the news making the rounds that Prof Chukwuma Charles Soludo’s Campaign team was attacked at Ihiala is totally false and should be disregarded_

_According to the release, the Soludo campaign team was said to be at Ogbaru Local Government Area when the unfortunate incident at Ihiala allegedly took place_

_It further said that though, a combined team of policemen and Soldiers had repelled an attack by unknown gunmen at Odoata Primary School, Ihiala, where the All Progressives Grand Alliance (APGA), was scheduled to organise a campaign rally for the November 6 gubernatorial election in Anambra_

_The release, however, noted that while the unfortunate incident was happening, Prof Chukwuma Charles Soludo and Governor Willie Obiano were both at Ogbaru at a campaign rally organised by APGA and not at Ihiala as was insinuated by some news outlets_

_The release further stated, that the news being peddled around that the campaign train was attacked is untrue and should be disregarded_

_It read further that Prof Soludo applauds the professionalism and gallantry of the combined security agencies who repelled the attackers and expressed his deep sympathy to the innocent people who were attacked._