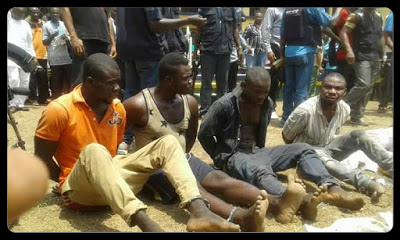 Obinna Ela, one of the gang members of the most vicious kidnap kingpin, Henry Chibueze, popularly known as Vampire, said that their squad unleashed more mayhem and terror on the members of the public after freeing their leader (Vampire) in a commando-like manner at the premises of the Owerri High court, Imo State, on January 27, 2017.

Chibueze, who was facing trial on offences bordering on kidnapping and murder, was forcefully freed by men armed with sophisticated weapons on a day his fate on the matter was reportedly said to be decided by the court .

Speaking to newsmen in Owerri, the state capital on Thursday, while being paraded by the police, one of the arrested kidnap suspects said that Vampire took him to four kidnap operations after his escape from the court.

Though he denied being among the gang that masterminded the onslaught at the High Court, Ela said that he coordinated four abduction operations with Vampire and was paid N100,000 by the ring leader.

He also said that a police officer was allegedly their driver during the kidnap operations and that they were shuttling through, Imo, Abia and Rivers states, respectively

The 26-year-old suspect who hails from Orlu Local Government Area of the state was unable to disclose the identity of the police officer as the operatives of the command battled to control the crowd that besieged the headquarters to behold the dreaded gang.

Addressing journalists, the Force Public Relations Officer, Jimoh Moshood, who paraded the dead body of Vampire and four other members of his gang, said that the police special force working under the supervision of the state Commissioner of Police, Taiwo Lakanu, swooped on the hideout of Chibueze in the early hours of Thursday.

The police spokesperson said that the police engaged the gang in a gun duel for hours in the dreaded Omu Awa forest in the Ikwerre Local Government Area of Rivers State and killed Chibueze while four of his men were arrested.

He gave the names of the nabbed ones as, Obinna Ela, Arinze Abecheta, Chukwuebuka Ikeazota, Samuel Ugochukwu and Clifford Aheana and added that  ammunitions were recovered.

Moshood recalled that Chibueze was a cultist who turned a vicious and dangerous kidnapper and armed robber and was declared wanted by the police since 2013.

He said that Chibueze, was responsible for several cases of kidnappings, murder of notable personalities like the killing of his girlfriend,  Sandra, and eight members of her family in Lagos State for allegedly stealing his N45 million share of the N110 million ransom paid by the family of one of his victims in Omoku, Rivers State.

The Police spokesperson said that, Chibueze, whom he described as a serial killer had confessed to have killed over two hundred people in kidnap and armed robbery cases.

While he asserted that the apprehended members of the gang would be charged to court at the end of investigations, Moshood said “The Inspector General of Police wishes to assure the good people of Imo State and other states of the federation of adequate security and implore them to cooperate with the police personnel deployed in their localities”.