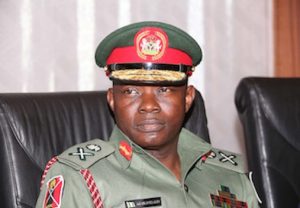 The Chief of Defence Staff (CDS) Gen. Gabriel Olonisakin, yesterday launched additional 20 new 400 horsepower gunboats, newly acquired by the Nigerian Navy to beef up the military combat weapons already deployed to the Niger Delta creeks shortly after the Niger Delta Avengers (NDA) announced its withdrawal from the peace accord, and threatened to resume hostilities in the region.

The additional gunboats came less than one week after the Chief of Naval Staff (CNS), Vice Admiral Ibok-Ete Ibas, announced deployment of troops and equipment to the creeks of the Niger Delta and the Flag Officer Commanding (FOC) Central Naval Command, Rear Admiral Abubakar Bello Alhasan, launched ‘Octopus Grip Two, with another 11 gunboats in Delta creeks.

Chief of Defence Staff, Gen. Gabriel Olonisakin, who launched the boats at the Nigerian Navy Ship (NNS) Delta, Warri, emphasized that the added fleet were necessary to enhance the Nigerian Armed Forces readiness to check increasing security threats in the country.

While performing the launching, Gen. Olonisakin, solicited the understanding and cooperation of the local indigenes with the armed forces in the task of protecting the nation’s critical assets, urging law abiding citizens not to entertain any fear as the operation was targeted at the criminal elements sabotaging the nation.

Explaining the reason why the Niger Delta environment had come under heavy military watch in recent years, Olonisakin condemned the new threat of violence by the Niger Delta Avengers (NDA), noting that violent agitation is unconstitutional and would not be allowed to go unchecked.

According to him, “Recent purported declaration of intent to resume hostilities by the Niger Delta Avengers rather casts an unfortunate gloom on the well being of the region and serves a sad commentary on the security environment. While the right to agitation is inalienable to any group, its association with violence is unconstitutional and will always be strictly prosecuted by the armed forces.”

Olonosakin commended the Navy for patronising indigenous companies to construct 16 of the gunboats, and noted that a South African company constructed the other four boats.

The CDS said the successful construction of the 16 boats was a clear testimony that with adequate encouragement, the underdeveloped technological capacity of indigenous companies could be harnessed for national development and improved security.

In a swift reaction to yesterday’s additional deployment, the Olu of Warri, His Majesty, Ogiame Ikenwoli, expressed concern over the massive military hardware being deployed to the Delta creeks alone and called for caution in the latest approach being adopted by the federal government in handing the situation in the region.

Specifically, the monarch urged the federal government to exercise restraint in its military action so as not to heighten the growing tension among the indigenes of the coastal communities in Delta state who had started abandoning their homelands to take refuge in other places to avoid falling victims of any possible military reprisal.

He noted that presently the indigenes are living in absolute fear of an unsecured environment to their lives and property and warned against aggravating the apprehension among the people in order not to provoke anger and lawlessness in the creeks.