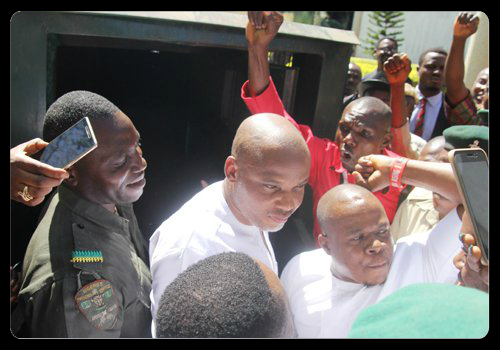 The trial of Radio Biafra Director and 3 others Nnamdi Kanu is to begin on March 20.

He will be tried along with three others— Chidiebere Onwudiwe, Benjamin Madubugwu and an engineer,  David Nwawuisi.

Justice Binta Murtala Nyako gave the defendants the opportunity to file another bail application but warned that they must be prepared for the trial. She struck out six of the charges. The remaining five were sustain.

Justice Nyako of the Federal High Court in Abuja, in a ruling, held that the six counts were not supported by the proof of evidence the prosecution submitted in court to support the charge it filed against Kanu and others.

The ruling was on separate notices of objection filed by Kanu, Onwudiwe and Nwawuisi, challenging the validity of the six counts.

Justice Nyako said the proof of evidence failed to disclose any prima facie case against the defendants in relation to the six counts.

The six counts are 3, 5, 7, 9, 10 and 11 in which they were charged with managing unlawful organisation, intention to manufacture Improvised Explosive Devices (IED) to be used against some Nigerian security agents and alleged improper importation of a radio transmitter.

Justice Nyako was of the view that the allegation in Count 3 relating to “managing of unlawful society punishable under section 63 of the Criminal Code Act” could not be substantiated by the proof of evidence.

The judge said the alleged, “improper importation of goods contrary to section 47(1) (a) (i) of the Customs and Excise Management Act” levelled against Kanu in Count 5 did not disclose the elements of the alleged offence bordering on the importation of a Radio Transmitter known as TRAM 50L.

The judge held that the allegation in Count 7 accusing Madubugwu of “managing of unlawful society punishable under section 63 of the Criminal Code Act” by accepting and keeping a container housing the radio transmitter which he allegedly knew was to be used for Radio Biafra, also did not disclose any element of the alleged crime.

She said count 9 in which Onwudiwe and Nwawuisi were charged with “conspiracy to commit treasonble felony contrary to Section 516 of the Criminal Code Act” did not disclose the elements of the alleged crime.

Justice Nyako said the count failed to disclose which of the acts of installation of the transmitter on the MTN mast site at Ogui Road, near St. Michale Church, Enugu State, and the agreement on the payment of N150,000 was the act that constituted the offence of conspiracy to commit treasonable felony.

The judge also struck out Count 10, which accused Nwawuisi of engaging in the “management of unlawful society punishable under section 63 of the Criminal Code Act”.

The prosecution had accused Nwawuisi of the offence for allegedly permitting the installation of Radio Biafra transmitter on the MTN mast for the purpose of propagating the objective of IPOB after being paid the sum of N150,000 by Onwudiwe.

Justice Nyako said the count could not stand because the proof that the IPOB was an unlawful society was not provided in the proof.

The judge also struck out Count 11, which accused Onwudiwe of “knowingly committing an act preparatory to an act of terrorism” by allegedly “carrying out research for the purpose of identifying and gathering of improvised explosive device-making materials to be used gainst Nigerian security operatives carrying out their lawful duties”.

The prosecution alleged in the count that Onwudiwe had by the act, committed an offence of “terrorism contrary to section 2(1)(a) of Terrorism (Prevention) Amendment Act 2011 as amended in 2013”.

The judge agreed with the defence that since the offence only had to do with an intention to commit a particular act, it was the magistrate court that had the jurisdiction to entertain such charge.

They are, in count 1, charged with “conspiracy to commit treasonable felony contrary to Section 516 of the Criminal Code act” by conspiring among themselves to broadcast on Radio Biafra “for states in the South-East and South-South zones and other communities in Kogi and Benue states to secede from the Federal Republic of Nigeria with a view to constituting same into Republic of Biafra”.

In count 2, Kanu is charged with treasonable felony by broadcasting in London between 2014 and 2015, calling for the secession of Republic of Biafra from Nigeria.

Count 4 accused Kanu of “publication of defamatory matter contrary to section 375 of the Criminal Code Act” by referring to the then Maj-Gen. Muhammadu Buhari (retd) and now President of the Federal Republic of Nigeria as “a paedophile, a terrorist, an idiot, and an embodiment of evil” in a broadcast on Radio Biafra on April 28, 2015.

Madubugwu was said to been caught with the firearms at his house in Ubulusuzor in Ihiala Local Government Area of Anambra State in October 2015.