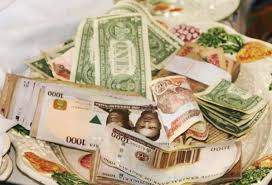 1. Appreciation and depreciation of currency is not related to race or color or who is the president be it Hausa Igbo or Yoruba. It is basically about production of goods and services and the demand of your products in the world market. A confused country that produces almost nothing will never meet up, policies only control your currency not the value of another countries currency against yours.

2. A country where over 500 industries died within 30 years must be stupid to complain of depreciation of her currency. We keep killing local industries and expect policies to make it up, it’s a joke sir. Don’t use China as an example if depreciating currencies and strong economy, China produces and may attract more export with that strategy unlike Nigeria that produces nothing.

3. A country where someone carried $2+billion simply to be shared is already a doomed one in terms of monetary policy and value. A country that produces Dizeani and Bafarawa who spent billion to appease demons. Those money without economic value is an economic poison injected into the system.

4. A country that favours importation over local production is doomed because it creates employment for another country while sacking her own citizens. Some people are working in Michelin and Dunlop somewhere, yet we use the tyre here. Don’t tell me principle of comparative advantage here, it’s not applicable.

5. A country that exports all raw materials without adding value is shameless to talk of depreciation of currency, to later re-import finished products of that materials is the peak of daftness. A bag of cocoa will go for like N1 million naira but when it is processed it will worth around N7million. Even farmers who produced raw cocoa can’t buy chocolate.

6. A country that deliberately operate banking system that gives loans to importers at the expense of local industries is doomed and should say nothing about depreciation. Most of the loans are given to senators and representatives not industrialists.

7. A country that give loans in billions to agric sector without monitoring & evaluation of such loan on how it gets to the real farmers is a sham. A guy collected over N2 billion agric loan, he bought a jeep, built a nice house and use the rest to import processed pork. Meanwhile, local pork farmers are dying here. Is that not a double tragedy, stressing forex at the same time killing local industries.

8. A country that spend more on few privileged politicians at the cost of the populace who are unemployed should not talk about money depreciation. A country that keeps paying NNPC staff N10 billion as salaries every month when a single drop of petrol was not processed shout shut up about depreciation of currency. Crime is rising as value added to the initial failure.

9. A country where it is difficult for investors to register businesses because of the governent officials demanding for bribe. Right from airport, to hotel, to minister to governors investors will bribe, all these are part of cost of investment. A friend brought investor on estate development just for the state commissioner in charge to demand 30% of the investment. To see the governor in a state will cost you N2 million as bribe before you can be scheduled. This is a state as poor as anything.

10. A country where the cost of travelling for treatment abroad by officials will build world class hospitals should not talk about naira against dollar parity. Money taken to that trip is part of stress on forex. Same as forex spend on pilgrimage, let religion fanatics keep off me here. Without going to Mecca or Jerusalem you can still make heaven. You waste forex on pilgrimage to later be talking rubbish about forex.

11. A country where few people have access to federal reserve and those few can get loans are not because of what they can produce but the connection they have, is that country not gone already?

12. A country where we import what we produce because it’s cheaper over there is gone.

13. A country that has arable land, teaming idle youths and still complain of hunger should not talk about currency depreciation. It’s annoying.

14. A country where free money flows can never control inflow and outflow of forex. Imagine someone who wants to hide his loot went to Aboki to buy dollars worth $50 million just to hide it in the basement of his house. That money has no economic value yet it deprived those companies that need it to import raw materials, those companies go to Aboki to buy at exorbitant price.

15. A country where a strong bank owners can influence shares from within Stock Exchange room to inflate their shares worth from N20 to N150, crash the same share to N30 and ready to buy it back at N28 all within a year. Forget it, currency will never appreciate in such economy.

16. A country where banks are involved in round tripping and inflated cost to siphon money is doomed. A company wants to import caterpillar worths $50,000. A bank made the forex $550,000j meanwhile no caterpillar was imported at last yet the money faded into private accounts. Who strain forex in that case?