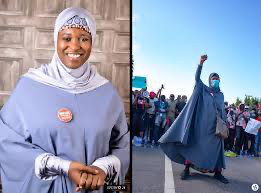 The co-convener of Bring Back Our Girls, BBOG, Aisha Yesufu, has called on the National Assembly to Impeach the president that even the Northerners are tired of him.

The popular Nigerian activist made the call in reaction to the massive attack on travellers along the Abuja-Kaduna highway where a lot of persons were kidnapped by Bandits.

The National Assembly, what are you doing? What part of the Constitution have you not read on when you can impeach the president?

Buhari is there, watching while the people are being killed, all he does is to travel.

Yesufu said the president have failed Nigerians and asked why President Mohammadu Buhari is still the president of Nigeria alleging that the president is “destroying the country for us, our children, grandchildren and our descendants and we are doing nothing about it.”

She also chided Northerners for their silence in the face of the insecurity and questioned why there’s no outrage from they like they do when there’s a national campaign like the #EndSARS protest.

Northern people where are you!! Life does no longer matter right? Where’s is the #SecureNorth?

Aisha maintained posited that “Buhari should be chased out of the Villa.”