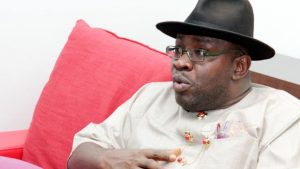 Bayelsa State Governor, Seriake Dickson, has said restructuring is a call for constitutional reforms, to guarantee a more stable country and not secession as being speculated in some quarters.

Dickson insisted restructuring is a return to true federalism.
He made the declaration at a retreat organised by Southern Senators Forum in Calabar, capital of Cross River State, at the weekend.
Dickson, who advocated protection of ethnic minorities to make Nigeria sustainable as a country in a paper, “Protecting ethnic minorities in project Nigeria,” argued that constitutional provisions or military force cannot ensured the continued unity of Nigeria.
Re-echoing his views that Nigeria’s unity is negotiable, the governor advised proponents of restructuring to rally round among themselves to advocate an equitable Nigeria rather than focus on constitutional provisions which cannot guarantee a country anchored on fairness and justice.
Dickson, who likened the situation in Nigeria to that of Soviet Union which eventually disintegrated, in spite of its military strength, noted that critics of restructuring should not interchange the word with disintegration.
“Restructuring does not mean secession. It is not co-terminous with a Nigeria that is divided. Restructuring simply means a call for constitutional reforms, to guarantee a more stable country.
“In other words, it is a return to true federalism.
“We should not shy away from the issue of restructuring, the more the opinions the better.
“That is the reason we need this debate. Nobody should tell Nigerians that our unity is not negotiable.

A lot of people talking about restructuring do not even know the issues,” he said.