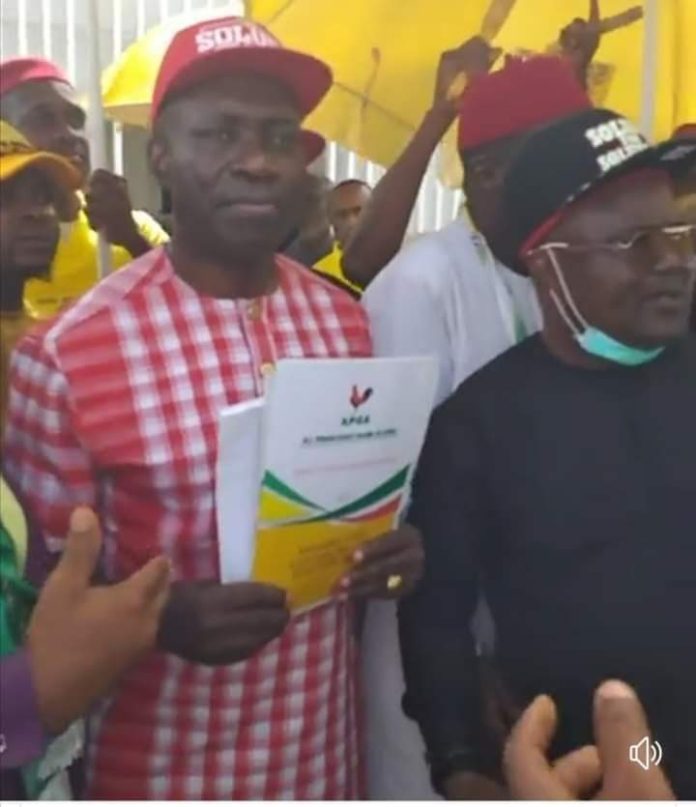 Cee Cee Soludo beat us to the game on what he would wear to procure his expression of interest and nomination forms. We had predicted he would appear in APGA House Abuja wearing his signature white senator or a fitting T- shirt or the APGA apparel embossed with the iconic Ikemba and the Willingly Working Willie. He did none of these. We are not disappointed either because unknown to many he is brewing another economic revolution. This time, he is peering at the new economy – fashion segment.

And it is becoming clearer that Soludo is not under promising when he said he would be producing one thousand youth millionaires each year he is in office as governor.

The top he wore on the black trouser is an Akwuete cloth locally woven. For those who may not know, Akwuete cloth is a hand woven textile produced in Igboland for which the town of Akwuete in Abia state is famous.

Now Soludo believes that a greatness is there for us to see in our past. This dying industry is one such example. But he is seeing a huge industry that has potentials not just to create jobs but be spurned to produce global brands which the world would love to wear and Ndigbo will be proud they are their gifts to the world. This is an unfolding fashion industry story we shall surely return to soon.

For now, admire Soludo in his wine red Akwuete with shades of white stripes uniquely hand woven in Igboland and tailored in Anambra; and imagine the huge industry we can have if we embrace using Akwuete to make fashion statements as a way of life.

We’re are sure he has many-sided more tricks in his economic emancipation bag; the real reason why Ndi Anambra and APGA are looking in his direction to win the November 6, 2021 election for them.

However let us for now join the jubilations across the entire Anambra landscape on his formal entry in the ring and wish him all the best.

A MEMO TO THE INDIGENOUS PEOPLES OF NIGERIA – Law Mefor