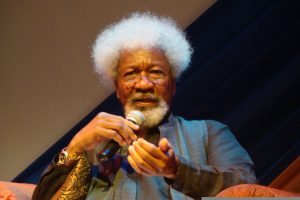 Nobel Laureate and playwright, Prof. Wole Soyinka, has said he will not support presidential candidates of either of the All Progressives Congress (APC) or the People’s Democratic Party (PDP).

He said this at an interactive session tagged Citizen Forum 2019.

“It is time for a totally new direction, and when an alternative emerges, we will give the candidate our backing,” he said.

President Muhammadu Buhari of the APC and former Vice President, Atiku Abubakar, of the PDP, are the two leading candidates.

The octogenarian said it is time to change the direction of the country in a positive way.

He said: “For the avoidance of doubt, let me make my position quite clear, because I don’t want any ambiguity; I, Wole Soyinka, will not be voting for either the two so called contesting parties. I find both of them worthy of absolute rejection..

“For a number of reasons which I will not go into here, I’m not interested in a comparative assessment. My position is simply that it is time for a totally new direction. And obviously, I’m not the only one, as I’m speaking, there is a coalition having its meeting in Lagos from which they hope to produce a consensus candidate.

“There is another group meeting in Abuja, also at the end would send us their consensus candidate. Things have been going on quietly in the background to try and change the direction of this nation in a very positive way, and to make the public understand that they do not have to be enslaved permanently to the old discredited order. It is my sole business in this election.

“I don’t believe in what is called negative vote which means, for me, throwing your vote in a waste basket, I believe instead in a creative vote, not a protest vote, not a negative vote but a creative vote. And a creative vote means that the will to at least sow a seed through your vote that will germinate eventually. The pace of germination is beyond the control of everyone, but it is never too early to make a beginning. It has happened before in other societies. When a dark horse emerges from nowhere and trumps all the political juggernauts caterpillars and so on with their performers, worthless, their capacity for violence and treachery.”

He added that the reason they are yet to arrive at a consensus candidate was because the supposed genuine third force was hijacked.

Meanwhile, former President Olusegun Obasanjo, has vowed that everything must be done to rescue the Nigeria’s democracy.

While warning key political actors to be mindful of what they do, Obasanjo said that the world is watching how the country will conduct it’s affairs before, during and after the general elections.

He urged Nigerians not to despair, but to remain optimistic, despite the challenges currently facing the country. Olusegun spoke in Abuja yesterday during the launch of a book, “Politics as Dashed Hopes in Nigeria”, written by Auwala Anwar.

He called on Nigerians to protect the nation’s democracy ahead of the general elections, insisting that, “our hope lies in democracy and good governance as one of the hallmarks of free fair and credible election. As for me, I will do everything humanly possible to safeguard democracy, with good governance for Nigeria and for all Nigerians.

“If we cherish democracy, we will all guard and protect our democracy. And that I believe is the main purpose of the book. Remember that if you stand aloof when evil is being perpetrated, you become an accomplice in the perpetuation of the evil

“I also agree that money has become an unnecessary important aspect of our politics. And that the elites are not putting their act together. I believe we have one thing that joins us together which is Nigeria’s nationality. I believe strongly that Nigeria should not be divided.”

Author of the book, Anwar, said the book offers an insight into the activities of the Congress for Progressive Change (CPC), which was founded by President Muhammadu Buhari. Buhari also ran for the office of the president on the same platform in 2011 against former President Goodluck Jonathan.

“When the CPC went into crisis. There were committees set up. We created a code of conduct because we believed the principal problem of the CPC was indiscipline.

“It was not a normal political party. There were various segments including the owners, labourers and workers, and the slaves,” he said.